Could the New York Giants consider Thaddeus Moss at tight end in the 3rd round of the NFL Draft? 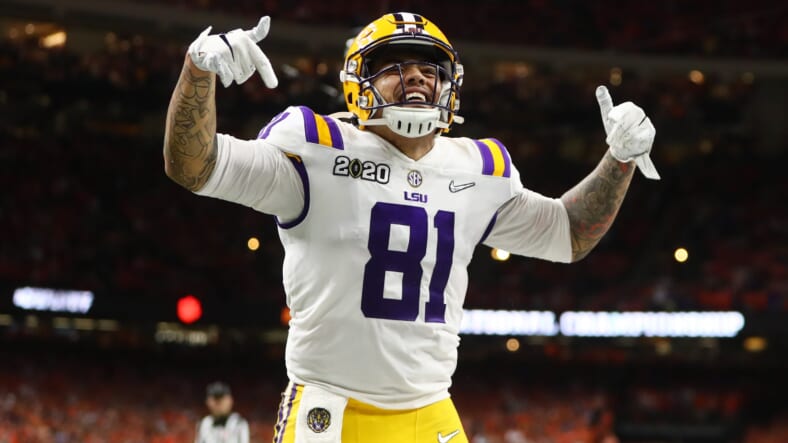 Should the New York Giants consider drafting a tight end with their third-round selection?

As the NFL Draft quickly approaches, it might be time for the New York Giants to consider drafting another tight end in case Evan Engram’s 5th-year option isn’t picked up.

A name that comes to mind is Thaddeus Moss, who is the son of Hall of Fame wide receiver Randy Moss. Thaddeus played for Louisiana State University (LSU); Moss did not get a chance to play in 2018 due to a foot injury that required two operations. In his final season as a Tiger, Moss played 14 games, had 47 receptions for a total of 570 yards. Moss averaged 12.1 receiving yards per catch, and also snagged four touchdowns this season, two of which came in the National Championship game.

Thaddeus Moss stands at 6’2″ and weighs 250 pounds, a perfect blocking tight end that can protect the quarterback and can also be a threat in the receiving game. Some of his strengths — treats run blocking with conviction, has tremendous hands and great instincts as a pass-catcher, and Moss holds a wide frame which makes it easy for him to bully other players like safties and cornerbacks.

Moss is not like his father. He will not blow you away with his speed or route running. A common weakness that comes up for moss is his footwork, getting in and out of breaks, and is known for not having a lot of wiggle room after the catch too.

Moss could be a great backup tight end for Evan Engram if healthy, Engram is coming off a 2019 season that was full of injuries. Engram’s season ended with a foot injury that would require surgery. The last game Engram played in 2019 was in New York’s 37-18 loss to the Dallas Cowboys on November 4th. Engram was put on the IR (Injured Reserve) and a day later had surgery to fix a damaged ligament in his foot.

Adding a player like Moss to the Giants’ tight end depth chart could work out tremendously. This could allow Engram to block less and get more active in the passing game. As we saw last season, Coach Shurmur had Engram blocking a lot, which could’ve led to his foot injury. With the addition of Moss, we could see more of Engram in the slot or even spread out wide. Engram is among the fastest tight ends in the league, at the combine he ran a 4.42 40 yard-dash. Engram could fill the role of a big wideout for the Giants and be a big-time weapon for Daniel Jones.

If Evan Engram cant plays a full season in 2020, Thaddeus Moss could be a significant weapon that could help out Daniel Jones in the passing and pass blocking game. Also, we can’t forget about Saquon Barkley; Moss could give Saquon the support he needs in the run game.

The Giants did, however, sign Levine Toilolo to replace Rhett Ellison, who retired this past offseason. The former 49er is a force in the run game but isn’t much of a threat as a receiver. Finding a high ceiling option like Moss could be justified based on the simple reality that many Super Bowl teams feature an elite tight end.