Can the New York Giants extract the best version of Dante Pettis? 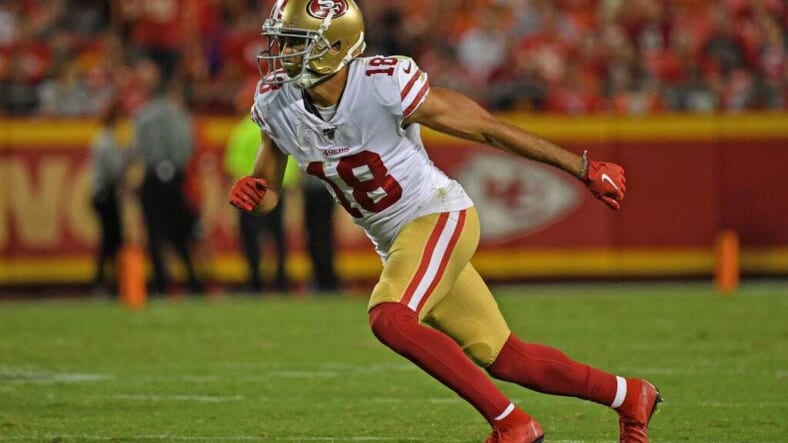 KANSAS CITY, MO – AUGUST 24: Wide receiver Dante Pettis #18 of the San Francisco 49ers runs up field during the second half of a pre-season game against the Kansas City Chiefs at Arrowhead Stadium on August 24, 2019 in Kansas City, Missouri. (Photo by Peter G. Aiken/Getty Images)

When the San Francisco 49ers waived former second-round pick Dante Pettis, after just three seasons in the NFL earlier this week, there was always going to be teams interested in his services. The New York Giants, just slightly below the New England Patriots in the waiver wire, was able to secure Pettis and his services. However, he has fallen off significantly since his dominant days back in college.

Pettis has had his issues in San Francisco, not taking to head coach Kyle Shanahanâ€™s methods and failing to compete at a high-level. After a successful 2018 rookie campaign, Pettis was injured after seven games and returned the next off-season overweight, missing out on big opportunities. He never fully recovered from his injuries, and as a result, his quality of play fell off.

It simply didnâ€™t seem as if the 49ers got to him and extracted his motivation and confidence, but Joe Judge in New York might be able to do just that. Every team has different ways of managing their club, and this is a fresh start for Dante with one of the biggest and most successful franchises in sports history. If thereâ€™s anyone who can whip him into shape, it is a coaching staff composed of veterans and disciplinary teachers.

This is what Dante Pettis is capable of doing, but he's got to get his body into shape…

Showed up overweight last year and was tested by the 49ers and he crumbled.

Fresh start, good coaches, can he return to glory? pic.twitter.com/hOUveTI5QM

HOT ARTICLE: 3 players the Giants should re-sign for 2021Â

How will the New York Giants factor Pettis in?

The Giants will likely have a spot for Pettis next season if he still on the roster, as they are preparing to release Golden Tate and his inefficient contract. Tate was actually disciplined for yelling â€œthrow me the damn ballâ€ on national television against Tampa Bay. He missed Wednesdayâ€™s practice as a consequence, and it is possible the Giants move on from him to maintain their culture in the locker room. This is by no means a guaranteed roster spot for the young receiver, who carries demons in his baggage with him to the Big Apple. He will need to earn his spot on the Giants, and it won’t be easy based on the expectations of Judge and co.

Back in his rookie season, Pettis finished with 467 yards and five touchdowns, showing his incredible abilities after the catch. He was collegeâ€™s most dynamic return man, but since then, he has only recorded 109 yards receiving.

Heâ€™s played in just one game this season, earning just 11% of offensive snaps. Pettis has mainly been factored out of their offense, and the 49ers havenâ€™t looked back, despite his talent. New York will be a fresh start for Pettis, and based on his recent history, I donâ€™t think it will amount to much, or you donâ€™t simply give up on talented football players after just three seasons. If the Giants manage to extract his quality, they will have gotten a steal off waivers.