Can the New York Giants beat the Dallas Cowboys in week 5? 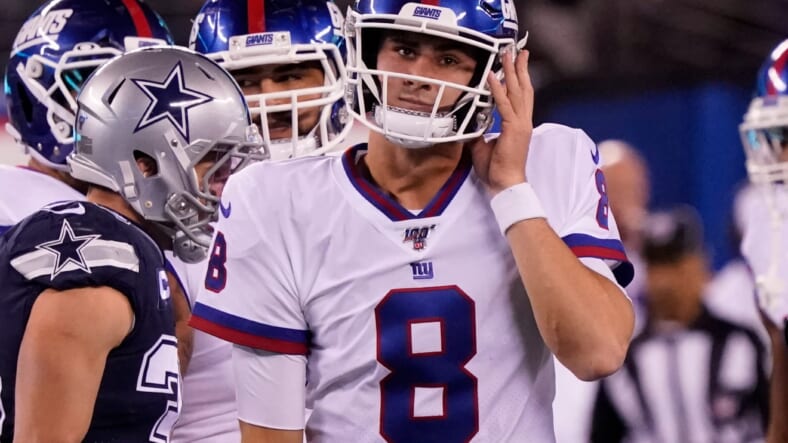 After starting the 2020 regular season 0-4, the New York Giants are preparing to face off against the Dallas Cowboys in week five. As always, this is an anticipated matchup between two divisional rivals, but the Giants havenâ€™t been able to overcome a strong Dallas team in recent years.

Both have their deficiencies, and they are exact opposites of one another. The Cowboys currently ranked third in total offense, averaging 31.5 points per game. They rank first in yards per game at 509.5. Comparably to the Giants, they are head and shoulders above the competition.

Big Blue currently ranks 31st in the NFL in yards per game at 278. They are last in points per game with 11.8. Only the Jets are better with 16.3, which is a significant difference considering itâ€™s an average of four games.

Not only do the Cowboys have an AWFUL defense (LAST in the NFL through 4 weeks in points allowed – 36.5), but they will be without SEVERAL offensive line starters in week five.

If there's any game for the Giants' offense to break out, it's this one #TogetherBlue

Defense is where Dallas struggles, offering a slight glimpse of hope for a Giantsâ€™ offense that has been nonexistent.

How the New York Giants can overcome the Dallas Cowboys:

It wonâ€™t be easy taking down Dallas, considering their lights out offense. Defensively, if the Giants canâ€™t get in the end zone, they will lose this game by a landslide. They held a superb Los Angeles Rams team to just 17 points in week four, but it wouldâ€™ve been less if the offense was able to muster any momentum.

Daniel Jones has been running for his life behind a spotty offensive line, and things arenâ€™t going to get much better with the strength of their schedule. The running game finally picked it up in week four, posted 138 yards on the ground. The passing game has been a major issue, which has forced Jones to utilize his legs too frequently. The weakness for Dallas lies in their secondary, with patchwork defenders holding down the fort.

With the Cowboys allowing 36.5 points per game, they have re-tooled their unit with aging stars and skeptical defenders. They are the single-worst scoring defense in team history, so far.

Against the Browns in week four, they allowed 307 rushing yards, and that was without Nick Chubb for a majority of the contest. Russell Wilson put up five touchdowns against Dallas in week three, showing their lackluster secondary.

The Giants have the talent to operate at an adequate level, and Dallas will give them an opportunity to finally break free from their schematic chains. Offensive coordinator Jason Garrett must get more creative, as they have seemingly utilized a base, day one scheme with a bit of creativity sprinkled in on occasion. Every play needs to be planned and executed to perfection, but the Giants are a long way from perfecting that reality.

At the very least, scoring a few touchdowns would be beneficial and provide some positive momentum. Dak Prescott has already logged 12 touchdowns through four games, meaning the Giants have a tall task ahead of them on defense.

Do I think the Giants can beat Dallas, yes, but I donâ€™t feel confident the offense can put up more than 20 points regardless. It really boils down to winning the turnover differential and winning the time of possession.