Are the New York Giants taking too big a risk on their pass rush in 2020? 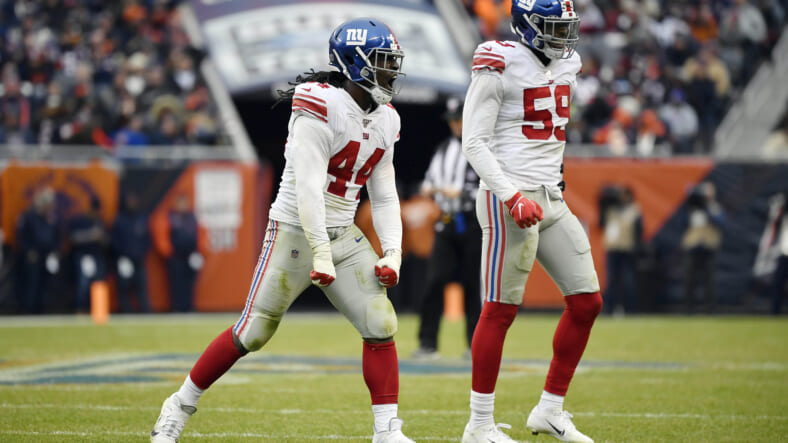 The New York Giants will either have a solid pass rush inÂ  2020 or struggle significantly with the lack of proven talent on the roster. One could argue that the Giants are taking too big a risk with the current pass rushers on the team.

The only player they signed in free agency was Kyler Fackrell, who stands at 6-foot-5 and 245 pounds. His last successful season was in 2018 when Patrick Graham was his linebackers coach. Fackrell tallied 10.5 sacks, 12 quarterback hits and posted a 14.3% missed tackle rate. From these numbers, we can conclude that Fackrell was a solid pass rusher two years ago, but he missed a good amount of tackles to pair with his 10.5 sacks. He must improve in that category significantly after posting an 11.5 missed tackle rate in 2019.

Nonetheless, he has proven to be healthy over the course of four years in the NFL, and he lost his starting position to Zaâ€™Darius Smith and Preston Smith last year, setting him back in his progression. While there is optimism, he can replicate his 2018 performance, having only one good year as his sample size does not breed optimism. We can hope for the best, but there is a very real chance Fackrell could be a dud.

The Giants are also placing their confidence in homegrown players. Both Lorenzo Carter and Oshane Ximines will play in expanded roles moving forward, despite Carter regressing in 2019.

In nearly double the number of snaps from his rookie season to 2019, his numbers either remained the same or worsened. He only recorded .5 sacks more in 2019 (4.0 –> 4.5), and he logged a 15.1% missed tackle right after not missing a single tackle in 2018. Taking that far of a step backward might actually be a good thing because we know what heâ€™s capable of and the potential he has.

This season is clearly an outlier, and if you can reverse this negative trend, Carter can be a successful player with Big Blue.

The New York Giants could have a stud in Oshane Ximines:

On to Oshane Ximines, who posted 4.5 sacks and nine quarterback hits on just 45% of defensive snaps in 2019. I anticipate he will earn more reps and hopefully emerge as a quality pass rusher for the Giants. He didnâ€™t miss a single tackle last year, and he showed a wide array of pass rush moves that justify optimism. He utilizes a nice speed rush, arm chops, swim moves, you name it. For a player out of Old Dominion, a lower-tier D1 school, he certainly requires more pass rush moves than the average prospect. I expect big things from him in 2020, and he certainly has the skill set to prove me right.

The next player on the list is Markus Golden, who the Giants placed a free agent tender on this off-season. Ultimately, if he doesnâ€™t sign elsewhere, he will stick with the Giants on a one-year, $5 million deal, which is about 110% of his 2019 contract.

Golden was the best pass rusher for the Giants in his redemption year last season, posting double-digit sack numbers and getting after the quarterback frequently. He was the leader on the defensive line, but the Giants were all but ready to let him walk in free agency before hitting him with a relatively cheap tender. If he sticks with the team, the Giants could have a solid pass rush to work with.

It is also fair to mention that defensive coordinator Patrick Graham utilizes a schemed pass rush, including linebackers and safety blitzes. The Giants also bolstered the interior of their defensive line with Leonard Williams, to help the outside linebackers put pressure on opposing quarterbacks. This defense is going to rush the passer on all different fronts, so we should expect a unique system that focuses on unpredictability.