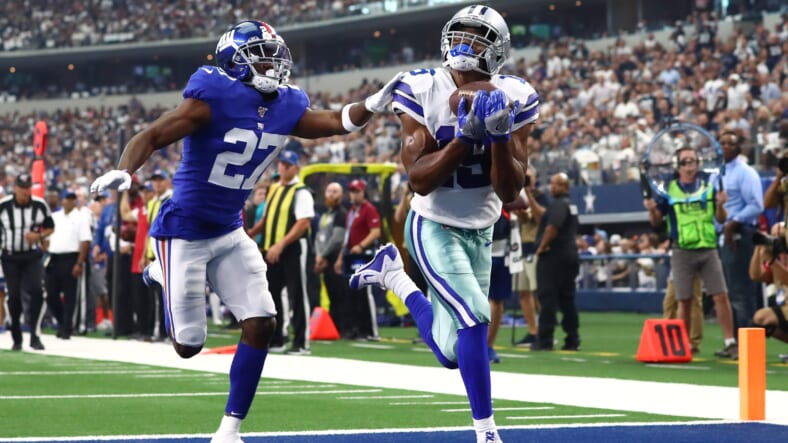 The New York Giants often didn’t score enough points on offense last season to pick up victories in close games, and in Daniel Jones’ second season as the starting quarterback, it’s possible that the team looks for offensive additions to change that and bring the Giants over the hump in the offensive area – one of the additions they could make happens to be a major player for one of their division rivals.

The player is Amari Cooper and his existing team is the Dallas Cowboys. Cooper is set to be an unrestricted free agent if he doesn’t sign a new deal with the Cowboys and such a deal hasn’t been agreed upon yet. If Cooper does hit the open market, ESPN has advocated for the Giants making a move to sign him, in their article listing a daring move for each NFL team this offseason.

Signing Cooper would hurt the division-rival Cowboys and reunite Cooper with the head coach for whom he had his greatest success: Former Cowboys coach Jason Garrett is now the Giantsâ€™ offensive coordinator. Cooper also makes sense for the Giantsâ€™ roster. Slayton surprised during his rookie season but did most of his damage on deep passes thrown 20 or more yards in the air. Cooper thrived on both intermediate (10-19 air yards, 37.2% DVOA) and deep throws (20-plus air yards, 79.8% DVOA) and would give Jones a plus weapon for every area of the field. Cooper is young for a sixth-year player, turning 26 in June. He aligns well with the Giantsâ€™ likely trajectory with Jones under center and ability to cut veteran receiver Golden Tate after the 2020 season to save $6 million in cap space.

Sterling Shepard is the main receiver for the Giants right now, with others such as Darius Slayton and Golden Tate competing for the number two spot, but despite appearing to have depth at the position, the Giants struggled at receiver last year thanks to injuries and spent much of the year without Shepard.

There was even talk that Shepard should retire, though he ended up coming back and will be on the roster this season again, too, likely as the number one receiver if nothing changes roster wise.

Signing a big name receiver like Cooper would take some of the pressure off Shepard, who still has yet to prove himself as the main weapon of the Giants.

Would such a move be worth the money? It’s hard to predict how the Giants will do at the receiver position this year and how much they need an addition like this, but going into a season where the Giants will start a second year quarterback, it likely wouldn’t hurt to have an elite name at receiver in addition to the players already there – especially with a lot of free cap space this year.