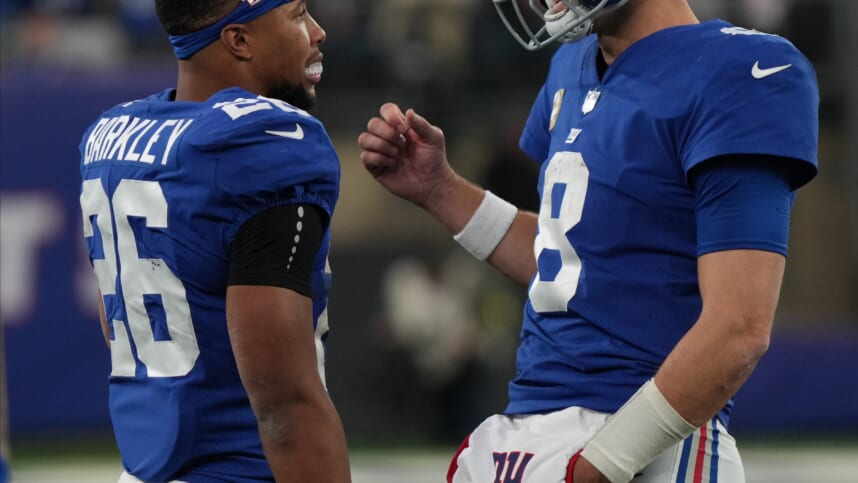 The New York Giants came out of the bye week with a strong 24-16 win over the Houston Texans. They are now off to their best start since 2016, when they went 6-3 through their first nine games, currently sitting 2nd in the NFC East at 7-2. That year was also the last time the Giants made the playoffs.

The win against Houston was an all-around stellar performance on both ends of the ball. Dane Belton recorded an interception, and the Giants did not commit a turnover in Sunday’s win. Here are the five best performers from the big win.

Five standout players for the New York Giants in Week 10:

Running Back Saquon Barkley continued his amazing comeback tour with an economical game on Sunday, rushing for 152 yards on 35 carries and scoring a touchdown. This was a season-high in carries for Barkley – as well as the most by any NFL player this season, and it was the fourth time this season he rushed for over 100 yards.

Giants head coach, Brian Daboll, had some complimentary words for his running back.

Quarterback Daniel Jones delivered his most efficient game of the season on Sunday, completing 13 of 17 pass attempts and throwing for 197 yards and two touchdowns. He also had a near-perfect passer rating at 153.3, a mark that is by far his best all season and is the highest out of any NFL QB in a game this season so far.

Jones was really effective in the passing game on Sunday, completing passes under pressure and finding open targets downfield. Another impressive performance from Jones, who is playing with a chip on his shoulder this season.

Defensive tackle Dexter Lawrence continued his Pro Bowl campaign with the game of his life. He had one sack, five (!) QB hits, five tackles, a tackle for loss, and a huge deflected pass. He was all over Davis Mills and the Texans offense, as Lawrence was a force to be reckoned with on the field on Sunday.

Giants’ injured wide receiver, Sterling Shepard, expressed high praise for Lawrence, who has been undoubtedly one of the best defensive tackles in the NFL this season.

“He’s a man amongst boys, for real.” Shepard said. “He’s a monster, man. It’s hard to stop a man that big and that fast. He’s hard to deal with [for] opposing teams. Week by week, he’s a force.”

Defensive End Leonard Williams had been quiet for most of the season but was far from quiet on Sunday. Williams had 9 combined tackles, a new season-high, and 0.5 sacks, and forced a huge fumble that was recovered by the Giants in the red zone early in the 4th quarter to take the momentum away from Houston.

This performance follows an 8 combined tackle showing against the Seattle Seahawks, and he has now recorded at least 0.5 sacks in consecutive games for the first time this season.

Second-year cornerback, Jason Pinnock, had mostly been a special teams player throughout portions of the season, but his only significant action was a lone punt return for no gain in Week 5.

After Giants’ prestige safety, Xavier McKinney went down with an injury where he suffered broken fingers after an ATV accident, Pinnock was moved from cornerback to safety to fill the void created by the loss of McKinney.

In Pinnock’s first taste of significant defensive action this season, he shined, recording 1.5 sacks and 2 QB hits from the secondary.

Pinnock expressed how much fun it felt to be more involved postgame on Sunday.

“It feels good to show them I’m more than just a special teams guy.” Pinnock said. “I showed an ability to get off the edge a little bit in practice.”

Jason Pinnock on his defensive impact via New York Post

The Giants will look to keep the momentum going

A solid win coming out of the bye is always a good thing for football teams. The Giants have yet to allow more than 27 points in a game this season, and they will look to continue that streak next Sunday when they play the Detroit Lions in a Week 11 matchup at MetLife Stadium.

Where you can find my other work