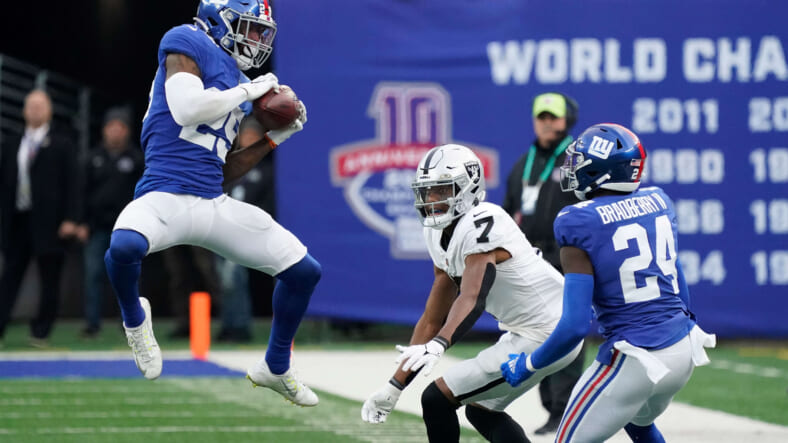 The New York Giants surprisingly overcame the Las Vegas Raiders on Sunday afternoon by a score of 23â€“16. If not for an elite defensive performance, the Giants likely wouldâ€™ve fallen due to poor offensive production. Despite Kenny Golladay and Kadarius Toney playing in the contest, they were able to generate just 37 total yards, while Jason Garrett relied heavily on the running game.

Nonetheless, the Giants won the time of possession and the turnover battle, two essential variables in winning games.

Three standout players for the Giants in win over Raiders:

The defense has held opponents to 20 or fewer points in three consecutive games, holding the Raiders to 16 on Sunday. The stand-out on defense was none other than second-year safety Xavier McKinney. McKinney recorded seven total tackles, four solo, two passes defended, and two interceptions.

One of Xavier’s turnovers was a pick-6 in the third quarter, setting the Raiders back by score, in which the Giants lead the rest of the game. That was the turning point for Big Blue, who desperately needed their defense to step up with the offense struggling to maintain efficiency.

After a tough start to the season, McKinney has four interceptions on the year and has emerged as one of the Giants’ best defensive backs.

If not for the game-ending strip-sack by rookie outside linebacker Quincy Roche, the Giants may have lost his game in overtime. Roche finished with four tackles, including two quarterback hits and a sack. With Lorenzo Carter dealing with an ankle injury and Oshane Ximines in the doghouse after an offsides penalty against Kansas City, it seems as if Roche has established himself as a starter moving forward.

The Giants now have two rookies starting at outside linebacker; surprisingly, they’re the best options at the position.

Without running back Devontae Booker, this contest wouldâ€™ve looked a lot different. Booker posted 99 yards on the ground on 21 carries, adding 23 yards through the air on three receptions. His second effort was essential in the Giants moving the football, especially with subpar run-blocking. Booker was bouncing off tackles and picking the right holes to attack, helping the Giants to 30:11 of possession.

Interestingly, Booker seems to be a better fit for Jason Garrettâ€™s offense, which relies on power running. His qualities differ vastly from Saquon Barkleyâ€™s, and with Booker playing exceptionally well over the past few games, they could continue depending on him on early downs even once Barkley returns.