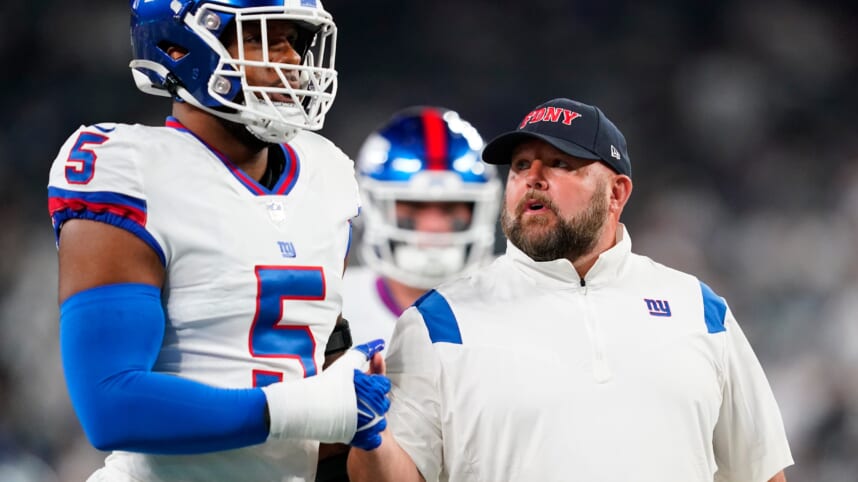 The 4-1 New York Giants are hosting the Baltimore Ravens on Sunday. This Week Six matchup is crucial for the Giants as they look to improve their winning-streak to three. The Giants are getting healthy at the right time, seeing a slew of important players returning from injury this Sunday. But in order to be t a formidable opponent in Baltimore, the Giants will need a few key players to step up.

Kayvon Thibodeaux has stood out in his three appearances in the New York Giants’ lineup. The rookie fifth-overall pick in this year’s draft has yet to earn his first career sack, but his impact has still been felt. Thibs made a clutch play down the stretch in the Giants’ Week Five victory over the Packers when he batted down a pass by Aaron Rodgers.

On the season, Kayvon Thibodeaux has already totaled eight combined tackles and three passes defended in three starts for the Giants. Per PFF, Kayvon has also pressured the quarterback a total of eight times. His breakout game is incoming, and the Giants will hope it comes this week against Lamar Jackson and the Baltimore Ravens.

The Giants have been without their 2022 second-round draft pick since Week One. Rookie wide receiver Wan’Dale Robinson injured his knee in the Giants’ opening-weekend victory over the Titans. He exited the lineup but seems healthy enough to return tonight. Robinson is “itching to get back” in Big Blue’s lineup this week, and he seems ready to go.

The New York Giants’ wide receiver corps has been decimated by injuries this season. Daniel Jones is in dire need of reinforcements. Injecting a speedy playmaker like Wan’Dale Robinson into the lineup could be exactly what the Giants need to revive their passing attack.

The New York Giants selected right tackle Evan Neal with the seventh overall pick in the first round of the 2022 NFL Draft. Five weeks into his rookie campaign, Evan Neal has struggled. The Alabama product was drafted with exceedingly high expectations. But, as most rookie offensive linemen do, Neal is enduring growing pains.