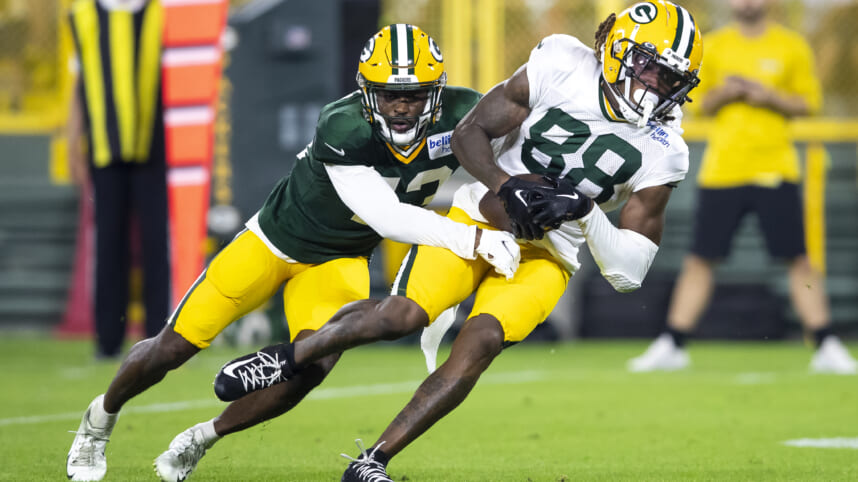 The New York Giants have an incredibly thin roster at multiple positions, notably tight end, cornerback, linebacker, and across the offensive line. With general manager Joe Schoen and head coach Brian Daboll needing to cut the roster down to 53 men by 4 p.m. on Tuesday, expect to see a flurry of moves afterward to help bolster the back end of the roster.

With fourth-round rookie Daniel Ballinger as the team‘s primary tight end up to this point, they may want to consider bringing in a veteran on the cheap. OJ Howard fits the bill nicely, spending his last five seasons with the Tampa Bay Buccaneers, winning a Super Bowl.

He only recorded 135 yards in 2021, but enjoyed a lucrative 2018 season, tallying 565 yards and five touchdowns with a 70.8% catch rate. Howard has fallen out of favor over the years, especially after the Buccaneers brought back Rob Gronkowski, failing to stick with the Buffalo Bills this summer.

Howard signed a free agent contract with Buffalo, so he will be subject to the FA market rather than waivers, in which the Giants could scoop him up at a cheap price point to compete.

One surprise cut by the Arizona Cardinals was linebacker Chandler Wooten, who flashed during the preseason. The rookie out of Auburn posted solid coverage numbers in his first two preseason games before having a tough outing as the Tennessee Titans in Week 3.

Altogether, he gave up 59 yards on six receptions but tallied an interception to go with 12 tackles. He made eight stops, showcasing some solid athleticism around the line of scrimmage.

Wooten was an undrafted free agent, but he did enough to warrant interest by the Arizona Cardinals if he clears waivers. However, the Giants could use a bit more depth at the linebacker position, and Wooten can immediately compete and serve as a competent reserve.

Another player, the Giants, may target is Kiondre Thomas from the Green Bay Packers.

Thomas had a solid preseason, recording eight tackles and two pass breakups, giving up just 8 yards in coverage. He recorded an 82.3 coverage grade against the New Orleans Saints in Week 2 of the preseason, playing in 45 snaps. His tackling was adequate, missing one against Kansas City in Week 3.

Altogether, he’s seemingly taking a nice step forward with his development, and with Green Bay hoping he will clear waivers, teams like the Giants could be looking to scoop him up to compete on the backend.