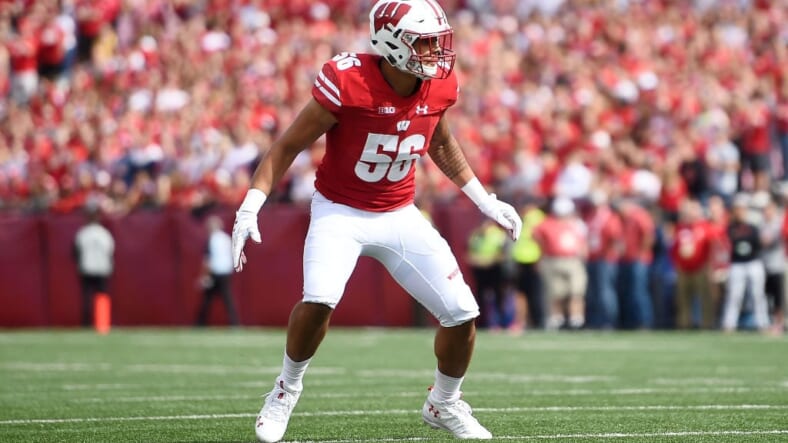 MADISON, WI – SEPTEMBER 08: Zack Baun #56 of the Wisconsin Badgers reacts to a play during a game against the New Mexico Lobos at Camp Randall Stadium on September 8, 2018 in Madison, Wisconsin. Wisconsin defeated New Mexico 45-14. (Photo by Stacy Revere/Getty Images)

The New York Giants had a (virtual) banner evening at the NFL Draft on Thursday night selecting massive Georgia offensive tackle Andrew Thomas with the fourth pick in the first round. Thomas was a need pick for sure but he will hopefully be a solid franchise left tackle for the next decade who will protect Daniel Jones’ blind side and open up holes for Saquon Barkley.

“I would probably say grinding it out on the ground,” Thomas said when asked what his preference is. “I definitely want to protect the quarterback, but the run game, I love it.”

That’s good news for the Giants, who plan on running the football more under new offensive coordinator Jason Garrett.

As Day Two of the draft approaches, the Giants hav many more needs to address. They have a good shot at doing that with the fourth pick in the second round (36th overall) but then don’t make a selection until the end of the night (No. 99 overall). That is, unless general manager Dave Gettleman swings a deal to either move up in the order or add more selections.

The Giants will be seeking several things in this draft – a safety, a center, a linebacker, a pass rusher and more targets in the passing game. At No. 36, here’s what they could be looking at.

None of the six top safeties were selected on Thursday night, so here is where the Giant could have the pick of the litter in LSU’s Grant Delpit, Xavier McKinney of Alabama, Minnesota’s Antoine Winfield, Jr., Ashtyn Davis of Cal, Jeremy Chinn of So. Illinois and Kyle Dugger of Lenoir Rhyne.

LSU’s Lloyd Cushenberry Matt Hennessy of Temple and Wisconsin’s Tyler Biadasz will all likely be on the Â board.

If the Giants can’t move up in Round 2 or 3, here’s what they will likely be looking at Pick No. 99. These are some names in additional to the players who didn’t get selected in Round 2.