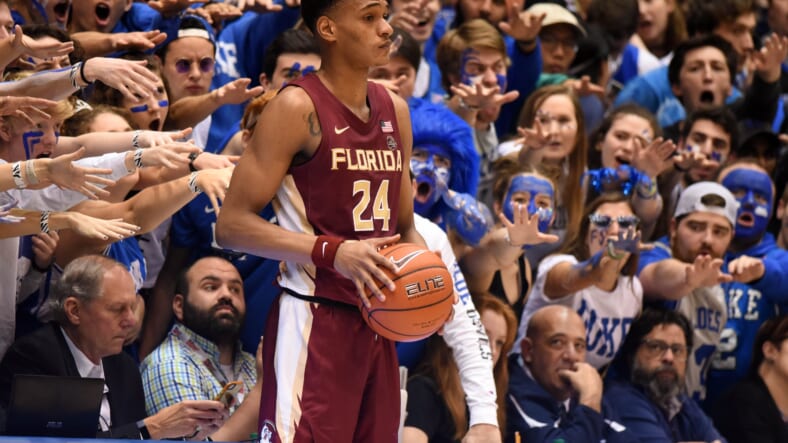 It’s no secret that the Golden State Warriors are studying all options, including trading, with regards to their No. 2 pick. [wpdiscuz-feedback id=”ot5j2ulxyq” question=”Should the Knicks trade up?” opened=”0″]The question is will the New York Knicks field an offer to trade up?[/wpdiscuz-feedback]

San Francisco Chronicle recently reported that Florida State University’s Devin Vassell is on the Warriors’ radar should they trade down.

According to multiple league sources, the Warriors believe Vassell is the top wing defender in this draft and would strongly consider him if they trade back to the 5-10 range. There is an outside chance that Golden State could even take him at No. 2 if it doesnâ€™t receive an enticing offer to move down.

Considered as one of the top two wings in this Draft Class along with Auburn’s Isaac Okoro, Vassell is all over the Draft Boards. He is projected to be selected anywhere from No. 6-12 range.

Vassell could add bench depth for the Warriors who are expected to have the Splash Brothers— Stephen Curry and Klay Thompson— back at full health next season. Vassell has drawn Thompson’s comparisons.

“People like to identify a player in college with a player in the pros. And I always said I thought he was more like Klay Thompson,” FSU coach Leonard Hamilton said in an interview with SB Nation’s Golden State of Mind.

Hamilton cited Thompson’s 41.2 percent three-point clip as a freshman in Washington State while his prized wingman, Vassell, shot 42 percent from deep in his two seasons with the Seminoles.

“And he has a lot of those qualities where he knows the ball is supposed to go going to the basket. Heâ€™s extremely confident, he always anxious to take big shots. One of the aspects of his game, I probably didnâ€™t utilize as much as his ability to create his own shot. When we needed him to create his own shot, he was able to go and make fall away fades and step-back jumpers and things that are going to allow him to be even more effective at the next level. He is a shotmaker, thereâ€™s no doubt about that,” Hamilton added.

The Knicks currently have the No. 8 pick and are also strongly considering Vassell and Okoro along with Iowa’s combo guard Tyrese Haliburton should they still be available. But it’s also no secret that the Knicks, who are looking for a lead guard, hasÂ LaMelo Ball on top of their Draft Board.

Ball has revealed during his Draft Combine media availability that he had conversations with the Knicks before the Lottery.Â  It was the only team he confirmed he had interviewed. When he was asked if he feels the Knicks would trade up for him, he had an inconclusive answer.

The following day, Ball curiously withdrew from the Draft Combine nixing other NBA teams’ chance to interview him. He still could or may have selected which teams to talk to outside the Knicks.

The Knicks have the Draft capital and young assets at their disposal to maneuver a trade. But they lack the veteran piece that the Warriors would likely covet.

However, there’s a unanimous belief according to ESPN insider Tim Bontemps last month that the Warriors will try to accumulate trade pieces to position themselves for a potential run at Washington’s Bradley Beal in case he becomes available during next season’s trade deadline.

If that’s the Warriors’ long play, then the Knicks could be in the mix to snag their No. 2 pick in this Draft.