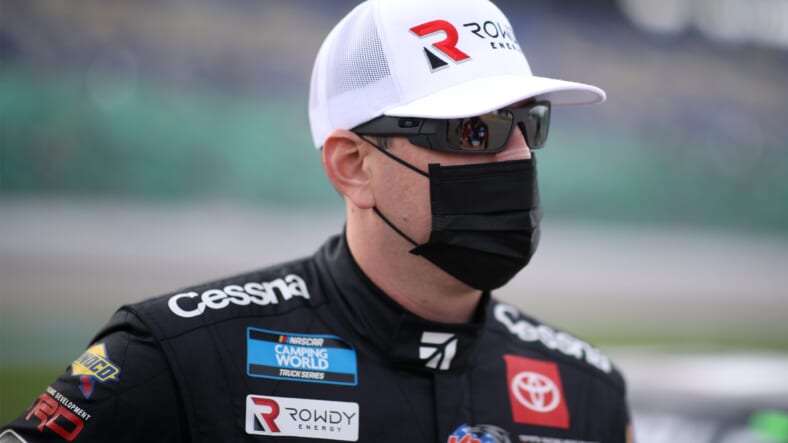 KANSAS CITY, KANSAS - MAY 01: Kyle Busch, driver of the #51 Cessna Toyota, waits on the grid prior to the NASCAR Camping World Truck Series Wise Power 200 at Kansas Speedway on May 01, 2021 in Kansas City, Kansas. (Photo by Sean Gardner/Getty Images)

A multitude of cautions led to a two-lap shootout at Kansas, where birthday boy Kyle Busch won his first NASCAR Cup Series race of 2021.

Retweet to congratulate @KyleBusch on his WIN and weekend sweep at Kansas Speedway. pic.twitter.com/rcfPzlubS5

With a name like the Buschy McBusch Race 400, it was only appropriate that one of the Busch brothers earned their first NASCAR Cup Series win at Sunday’s event at Kansas Speedway.

The younger Kyle Busch took the honors on Sunday, celebrating his 36th birthday with the 58th victory of his Cup Series career. Busch also won the Camping World Truck Series event on Saturday night. On the premier Cup level, he survived a wild two-lap shootout brought on by a late multitude of cautions to earn the victory. Kevin Harvick finished second, followed by Brad Keselowski, Matt DiBenedetto, and Chase Elliott.

Busch’s win is involved in several historical marks. He reties Harvick at 58 career Cup Series wins, becoming the 10th driver to reach that tally, and has now won at least one Cup race in each of the last 17 seasons, tying David Pearson for the second-longest such streak of all-time (Richard Petty leads at 18). Busch also becomes the second driver to win multiple races on his birthday, joining Cale Yarborough. A previous celebration came at Richmond in 2009.Â The victory also came at an emotional time for Busch, as he and his wife Samantha have been open about their struggles with fertility. Samantha did not attend Sunday’s race, encouraged by Kyle to take their five-year-old son Brexton to his own racing event.

The Kansas race ran incident-free for over 200 laps before the course of the event changed during the final cycle of green-flag pit stops. A loose tire from Tyler Reddick’s No. 8 stall landed at the edge of the divide between pit road and the infield. Race officials opted to wait until every car pitted before waving the yellow flag for debris.

That yellow ended the domination of Kyle Larson, who led a race-high 132 laps and held a large lead over Busch when the yellow came out with 37 laps to go. That caution begat three others, as separate incidents removed Denny Hamlin, Ricky Stenhouse Jr., and Christopher Bell from contention. Busch took the lead at lap 257 of 267, shortly before a wreck between Bell and Stenhouse also took out Ryan Preece.

Busch’s No. 18 Joe Gibbs Racing Toyota began the final restart starting next to Ryan Blaney, who a push from Larson behind him. That shove was a bit too strong, as Blaney got loose, removing them both from victory consideration, and relegating Larson to 19th and Blaney down to 21st. Busch thus drove away for the win, becoming the 10th different driver to win over the 2021 season’s first 11 races. Kansas will host one of the ten playoff races later this fall.

The NASCAR Cup Series will return to action next weekend at Darlington Raceway, as the circuit celebrates its annual “throwback weekend” on Mother’s Day through the Goodyear 400 (3:30 p.m. ET, FS1).