NASCAR: Kevin Harvick reflects on the past, present, and future 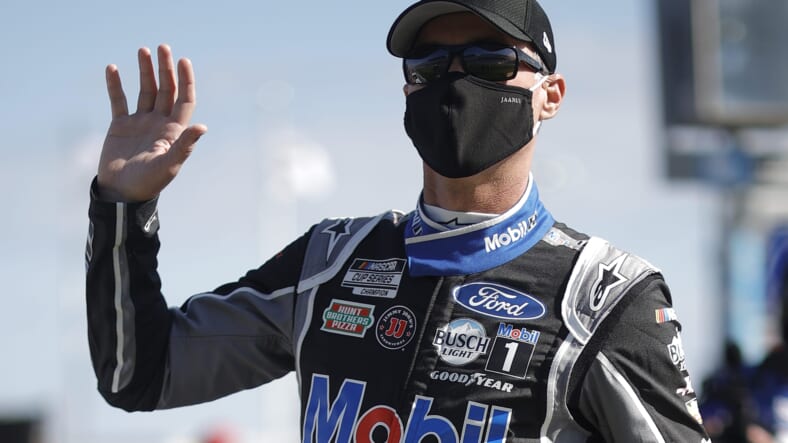 As the NASCAR Cup Series rolls in the Phoenix, Kevin Harvick took some time to reflect on his lauded racing career.

Kevin Harvick has spent his NASCAR Cup Series career partaking, even creating, a different brand of March Madness. Thursday, for example, will mark the 20th anniversary of his first Cup victory, earned in just his third start. Harvick had taken over the Richard Childress Racing Chevrolet left behind by the late Dale Earnhardt and held off Jeff Gordon in a photo finish to win the Cracker Barrel Old Country Store 500 by a .006-second margin.

“It feels like a lifetime ago,” Harvick said of that emotion afternoon in reflection on Tuesday morning. Brought into the Cup Series through the most tragic of circumstances, Harvick looked back at the safety innovations made over the last 20 years.

“I think as you look at the sport the one thing that sticks out to me is just the massive amount of effort that NASCAR has put into putting our sport where it is today from a safety standpoint, and I think from Daleâ€™s death and to where we are today and the things that accident taught us about our race cars and safety equipment and seats and walls and chassis,” he said. “The way that our sport operates and the way that sports operate in general is much different than it was in 2001, but the safety side is the side from a driving standpoint that sticks out the most to me.â€

More recent history weighed on Harvick’s mind as well. The NASCAR circuit returns to Phoenix Raceway this weekend, with the Cup Series race coming on Sunday (3:30 p.m. ET, Fox). Phoenix is the current site of NASCAR’s championship weekend, supplanting Homestead-Miami Speedway last season. But, at least this weekend, Phoenix might better known for hosting the last “normal” race weekend, one rife with the typical trappings of a NASCAR race weekend: practice, qualifying, the seating and garage areas packed to the gills. That afternoon, fans watched Joey Logano hold off Harvick to win the Phoenix spring event now known as the Instacart 500.

Days later, the ongoing health crisis served as the ultimate red flag pushing back the circuit’s return to Atlanta. NASCAR held out as long as it could, but it eventually joined its fellow professional leagues in hiatus before returning two months later.

Harvick would become one of the most prominent faces of NASCAR’s triumphant return. Adhering to social distancing mandates limited on-site personnel and often had drivers go right from their streetcars to their racecars. Qualifying and practice were eliminated to confine race weekends into a single day of action. Already bound for the Hall of Fame in Charlotte prior to the pause, Harvick, the 2014 Cup Series champion, made his case to be included amongst the immortals.

The No. 4 Stewart-Haas Racing Ford won the first race back at Darlington in May, the first of a series-best nine wins. It allowed him to move into seventh place on the premier circuit’s all-time wins list. Bad luck in the postseason prevented Harvick from competing for a title in the regularly scheduled return to Phoenix in November. But it allowed a national audience, some of whom were enjoying their first racing experience, to witness his greatness and seal his spot amongst the essential names in NASCAR history through dominant efforts unaided by practice or qualifying runs.

Harvick, however, was more pleased with the changes NASCAR was able to make as a whole, reasoning that a hidden benefit of the forced changes was that the sport took full advantage of a chance to try new things.

“As a sport, weâ€™ve done a really good job of navigating and adapting to our environment and doing the things that we need to do to put on a race and a show and obviously youâ€™re seeing fans back in the stands,” Harvick noted. “I think our sport has been a leader on a lot of those types of things. I think, from a team standpoint and a sport, weâ€™ve definitely been able to try a lot of things we probably wouldnâ€™t have tried if it wasnâ€™t for COVID.

“I think when you step back from it COVID will have forever changed our sport in many different areas,” he continued. “I think weâ€™ve realized a lot of inefficiencies weâ€™ve had as a sport from how many people we take to the track to how we function, how many days we need to be at the track. There are just so many little things that will make us more efficient, whether itâ€™s how we bring guests to the racetrack, how we sign in, the sheer number of people, the days weâ€™re at the racetrack.Â  I think there are just a lot of things that happened that probably wouldnâ€™t have happened as rapidly if we werenâ€™t in this environment, so in a really, really bad scenario, I think weâ€™re gonna come out of this with a lot of ideas and tried a lot of things we might have not necessarily tried if it was a normal year.â€

On a personal level in dealing with the pandemic, Harvick was far more pleased to speak about his off-track exploits. He has spent extended time with his family, noting he has sat down to more homecooked meals and doesn’t even leave to go grocery shopping. He and his wife DeLana continue to homeschool their children Keelan and Piper, even with schools open in the local area.

“Thereâ€™s a lot of things that have changed personally in the way that our household functions in a very good way,” the patriarch Harvick said. “I think thatâ€™s probably something that I would tell you is how racing used to be.”

Looking back at some of the more emotional, yet triumphant, moments of his Cup career allowed Harvick to step away from his 2021 endeavors hitting a bit of a wall last week in Las Vegas. The No. 4 Ford started on the pole, earned through strong finishes over the first three events. Harvick and reigning Daytona 500 champion Michael McDowell were the only drivers to earn top ten finishes in each leg of the opening trio.

Alas for Harvick, he struggled with an ill-handling racecar all day and eventually finished a lap down in 20th. Somehow, that was the best part of the afternoon for SHR, as Harvick’s No. 4 was their best-finish vehicle. Rookie Chase Briscoe finished immediately behind him while last season’s Rookie of the Year and Harvick’s fellow 2020 playoff contender Cole Custer rounded out the top 25. Aric Almirola, another playoff man in the No. 10 Ford, continued a brutal start to the season through a wreck that pushed him back to dead last in 38th.

Asked to describe his No. 4 Ford last weekend, Harvick merely replied “not fun”. But Harvick insists he’s not angry, and that the affair has already been forgotten. He says he would have the same mindset had he reached victory lane on Sunday.

“(Being) angry takes too much time and itâ€™s hard to carry that all the way through the week,” he said. “IÂ think when you look back at the first race last year and you have a chance to win the race and have the best car and then you go back to the second race and things donâ€™t go your way just because itâ€™s not what you expected, thatâ€™s just part of what we do.Â  You guys sometimes see the results and look at it and say, â€˜Heâ€™s gonna be this or that,â€™ and, really, itâ€™s just the same.Â  Itâ€™s really no different as you get into the meetings on Monday.Â  The conversations may be different, but itâ€™s the same routine week after week for me.â€

Phoenix would be a perfect place for Harvick to get his 2021 campaign back on the right track. He is by far the winningest driver in the history of the mile-long oval in the desert with nine visits to the winner’s circle. No other driver has earned more than four wins at the track.

The closest Harvick came to displaying any form of vanity was when he addressed an inquiry over whether he was a threat at Phoenix as a “silly question” in a tongue-in-cheek manner.

“I think you should go back and look at the first race from last year that we led the most laps and had the fastest car. We wound up finishing second,” Harvick said of last spring’s visit. “I would consider us a challenger at just about any racetrack that you go to, but youâ€™re not gonna be that way all the time, so, I think as we go to Phoenix you expect to go there and perform well.â€

As Harvick hits up Phoenix, his past and present will take center stage. But his future is slowly taking shape as well.

With the road ahead reserved for his extracurricular time, Harvick’s focus lies not on the interesting Cup schedule ahead…he did leave the door open to running a similar race or even the Camping World Truck Series event prior to the Cup cars dirt excursion at Bristol later this month…but on the piloting antics of Keelan, who embarked on a racing journey of his own. The junior Harvick is often seen hitching rides with his dad on NASCAR race days, but the eight-year-old picked up his first go-kart victory last July…less than a week after Kevin won at Indianapolis.

Showcasing talents through four wheels has never been a hidden talent in the Harvick family. After all, DeLana has dabbled in racing herself and served as the co-owner of Kevin’s eponymous race team that won 53 races at the NASCAR Truck and Xfinity levels during a decade of competition (2002-11) before merging with his former cohorts at Richard Childress Racing. The elder Harvick hinted that Microsoft Excel might be one of his best teammates in this day and age, especially when it comes to helping Keelan fulfill his racing dreams.

“It just takes a lot of planning because in order to properly teach somebody how to race they have to race a lot,” he said. “I think this is kind of the first time that weâ€™ve jumped into trying to plan two racing schedules and where everybody is going to be and keeping mom happy with where weâ€™re at with school and her having to load up and take everybody to the go-kart track is new for her, so itâ€™s a lot of spreadsheets.”

But while Harvick might be making plans to conquer some of his own racing challenges, one challenge that isn’t coming anytime soon is the construction of a trophy case for his son.

“I have to remind him periodically that heâ€™s still just a go-kart racer and until he gets a real job that heâ€™s still under control of mom and dad,” Harvick said with a laugh. “So he can have a little bit of space in his little room downstairs with his iRacing simulator and all the things that he has down there, but heâ€™s gonna have to go find his own place if he wants to be in charge of where they all go.â€