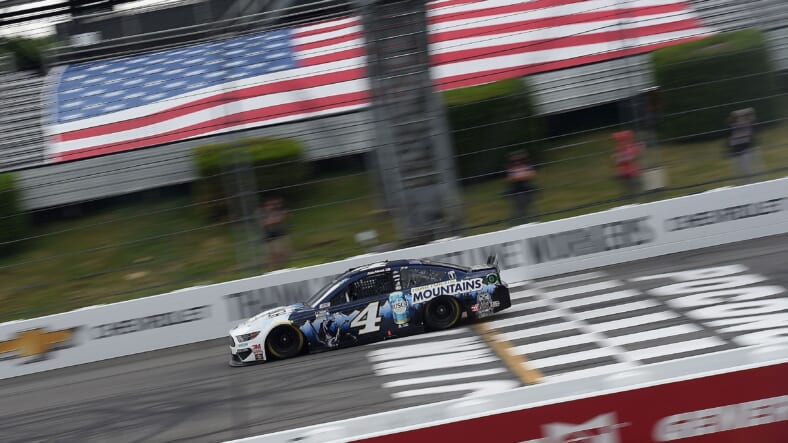 A bold strategy allowed Kevin Harvick to win at the Tricky Triangle on Saturday, the first half of a rare weekend doubleheader.

For Kevin Harvick, the 39th time at Pocono Raceway was the charm.

Harvick took home his third win of the NASCAR Cup Series season and his first at Long Pond, Pennsylvania landmark known as “The Tricky Triangle” in his 20th season on the circuit. His win at the Pocono Organics 325 in partnership with Rodale Institute also marks the 52nd career Cup victory of his career.

“Everybody from Stewart-Haas Racing has done a great job. We’ve had really fast cars every time we’ve come to Pocono, just hadn’t got to Victory Lane,” Harvick said in a postrace Zoom conference. “It was definitely awesome to get to Victory Lane today with our Busch Beer Ford.Â Â Proud of all the men and women at Stewart-Haas Racing for everything they’re doing right now.”

Harvick won with a bold strategy instituted by he and crew chief Rodney Childers. The No. 4 car pitted on lap 66 of 130 but only took two tires. In the early stages of the final 53-lap stage, he and teammate Aric Almirola were running in the top two spots when each hit pit road with 37 circuits to go. Duplicating the two-tire strategy, Harvick emerged from pit road with about a 12-second advantage over his Stewart-Haas teammate that had won the second stage and led the most laps on the afternoon/early evening.

The win at Pocono was the first win for both Harvick and Childers. They previously had collaborated on four runner-up finishes at Long Pond and Childers brought over an additional such finish while working with Mark Martin in 2012. Harvick has now won at every track on the Cup Series circuit with the exceptions of Kentucky and the Charlotte road course. He’ll get the respective opportunities on July 12 and October 11.

“I want to win everywhere,” Harvick said. “As well as we’ve run here, you definitely talk about it. For us, it was kind of one of those things where you joke around about it. We’ve run plenty good enough to win races here. It’s kind of like Texas. We finally knocked down that wall and won three years in a row.Â Â Hopefully that’s the same trend that happens here at Pocono.”

There’s hardly any time for Harvick to celebrate the victory, as the Cup Series immediately returns to action in Long Pond on Sunday for the Pocono 350 (4 p.m. ET, FS1), which will run 10 laps and 25 miles longer than its predecessor. With the top 20 of the starting lineup set up through inversion of Saturday’s results, Harvick will have to start 20th. Drivers are also mandated to use the same car than ran in the 325-mile event.

That was the reason Harvick opted not to perform a celebratory burnout after scoring his victory. Even if he wasn’t planning on saving the motor for Sunday, Harvick declared that he has no interest in celebrating until fans are back in the stands on a full-time basis and he can celebrate his triumphs in victory lane with his race team.

“‘Im not doing any more celebrations with nobody out there to celebrate with. Until the fans come back, I’m not doing a burnout, standing on the car, doing any of that stuff. It doesn’t feel right not having my team in Victory Lane,” Harvick said. “We miss the fans. I miss my team being able to be right in there with us because those are the guys and gals that are making it happen. It’s tough to give an elbow bump or wave at them.”