NASCAR: Hamlin and Harvick picking up where they left off in 2020 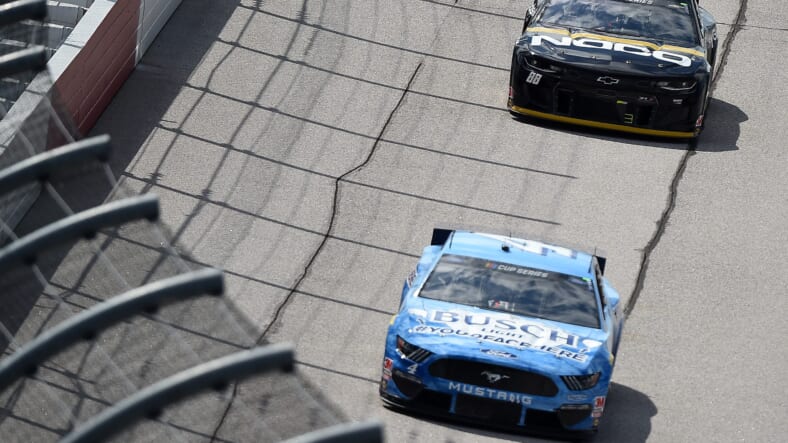 DARLINGTON, SOUTH CAROLINA – MAY 17: Kevin Harvick, driver of the #4 Busch Light #YOURFACEHERE Ford, leads Alex Bowman, driver of the #88 ChevyGoods.com NOCO Chevrolet, during the NASCAR Cup Series The Real Heroes 400 at Darlington Raceway on May 17, 2020 in Darlington, South Carolina. NASCAR resumes the season after the nationwide lockdown due to the ongoing coronavirus (COVID-19). (Photo by Jared C. Tilton/Getty Images)

During last year’s unprecedented NASCAR Cup Series season, we saw Kevin Harvick and Denny Hamlin become the two most dominant drivers over the course of the season. Although neither won the championship, the duo combined for 16 wins and 38 top-5s.

And now, three races into the 2021 season, Harvick and Hamlin have picked up right where they left up. Both are winless thus far but have run up front in all three races of the Florida slate and currently lead in points.

To open the season, both drivers managed to avoid the last-lap crash of the Daytona 500 and placed in the top-5. Hamlin ran up front all day and won the first two stages of the race, but green flag pit-stops shuffled him to the back of the pack and out of contention. Harvick quietly ran towards the front all day, missing the lap 14 crash and other incidents.

A week later at the road course, Hamlin placed 3rd and Harvick placed 6th. Hamlin won another stage and ran up front, while Harvick didn’t make a push until towards the end of the race.

At Homestead, Harvick registered a 5th place finish while Hamlin finished 11th. Harvick was solid all-day, while Hamlin battled. Hamlin believed the car was losing power early and struggled, but got the car up front by the beginning of stage three. However, a pit road speeding penalty sent Hamlin to the rear, and could never recover.

Although they haven’t won yet this year, Hamlin and Harvick are by far the two fastest cars once again in 2021. They are the only two drivers to have placed consistent finishes this year and show promise at three different track types. As NASCAR heads to another intermediate track this weekend in Las Vegas, look for Hamlin and Harvick to run up front again and contend for the win.