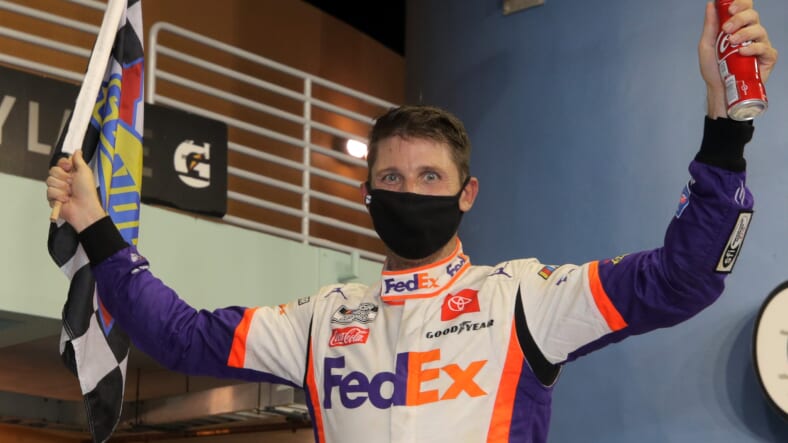 Denny Hamlin passed Joe Gibbs Racing teammate Martin Truex Jr. with eight laps to go to take the first half over a doubleheader in Delaware.

In what he certainly hopes is a sign of things to come for the looming postseason, Denny Hamlin not only bested his teammates from Joe Gibbs Racing but outliers from Stewart-Haas Racing and Hendrick Motorsports as well.

Hamlin’s No. 11 Toyota passed the No. 19 of comrade Martin Truex Jr. with eight laps to go in the first half of a doubleheader at Dover International Speedway. Eight laps around the establishment known as “The Monster Mile” later, Hamlin took home his NASCAR Cup Series best sixth victory of the season, winning the first of two races labeled the Drydene 311. The mile-long track is hosting a pair of 311-lap races as NASCAR continues to play out its full season sets across its national series.

With the win, his first in 29 tries at Dover, Hamlin is tied with Kevin Harvick for the most on the premiere Cup circuit this season. Two races remain before the Cup Series playoffs begin at Darlington Raceway on September 6.

“I’m thinking about playoff points to be honest with you,” Hamlin said after the race. “Even though everyone would say, ‘We’re a lock, it’s not a lock’, I’ve had such crazy (stuff) happen to me in these Playoffs during the course of my career, I don’t want to take any chances.Â I just want to lock in all the Playoff points I can possibly get and get to Phoenix and give myself a shot.”Â

Though Harvick is set to clinch the regular season title, Hamlin is set to serve as the second seed thanks to his accumulated wins and stage victories.

Hamlin began the day on the front row thanks to NASCAR’s new starting lineup formula. The process has eschewed the random draw for a performance-based setup accounting for speed and finishes in the prior race, as well as placement in the standings. He missed out on leading the opening laps thanks to a strong opening from polesitter Chase Elliott, who won the inaugural Cup race on the Daytona road course last weekend.

Unperturbed by a crash on the sixth lap that ended the day of Kurt Busch, Elliott led until a competition caution came out at the 25th circuit. Hamlin beat Elliott off pit road and took his first lead of the day at lap 71, passing Austin Dillon (who opted not to pit at the competition pause).

After leading the next 78, Hamling returned to the lead at lap 161, passing a desperate William Byron hoping for a caution. Hamlin won each of the first two stages of the race, giving him a series-best seven this season.

With lead laps retreating to pit road after the second stage, Truex emerged as the leader at lap 189, only relinquishing it for his final stop of the afternoon at lap 254. Truex held the lead as that cycle ended, but his teammate Hamlin was able to catch up with him and make the fateful pass for the win. It’s his 43rd visit to victory lane since his Cup career began in 2006 and he also matches his win total from all of last season. He’s the first driver to win at least six races in consecutive years since Jimmie Johnson did so four times (2007-10).

Hamlin is perhaps finding his groove at the perfect time with the regular season dwindling down. He has now finished either first or second in five of the last six races. Truex has likewise been a mainstay at the top of the leaderboard, as Saturday marked his sixth straight finish in the top three.

Joe Gibbs’ Toyotas rounded out the top three with Kyle Busch’s No. 18 in third. Harvick finished fourth while Elliott recovered from early contact with Clint Bowyer to come home fifth.

The second half of the Drydene 311 will be run tomorrow afternoon (4 p.m. ET, NBCSN) before the regular season wraps up on Daytona’s traditional oval next weekend.