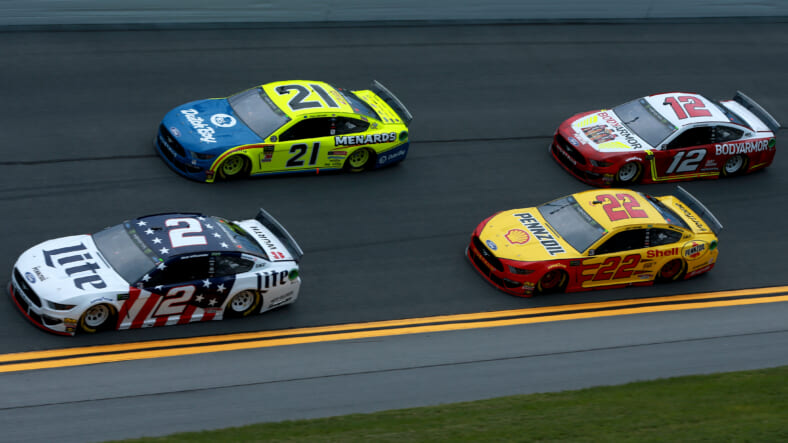 Team Penske accounted for half of the NASCAR Cup Series’ final four title contenders, but they feel they can do better.

Well regarded for his endeavors at both the NASCAR and open-wheel levels, Roger Penske’s first trek into the former came in 1972. After moderate success with Bobby Allison throughout the 1970s (four wins and a pair of fourth-place finishes), Penske left the sport after the 1980 season but returned 11 years later to enjoy prosperity through the “Blue Deuce”. Back by sponsorship from Miller Lite and the talents of 1989 champion Rusty Wallace, the No. 2 Ford won 36 races between 1991 and 2001. During that time, Penske opened a second car, the No. 12, driven by Jeremy Mayfield (1998-2001) and later Ryan Newman (2002-08). A third car began racing in 2004, becoming the No. 22 seven years later.

Wallace retired after the 2005 season, leaving the No. 2 to fellow Cup champion Kurt Busch. Former Hendrick Motorsports protege Brad Keselowski ventured over to the No. 2 in 2011 and brought home the organization’s first Cup championship the year after. Another transfer, Joey Logano from Joe Gibbs Racing, brought the title back to Penske six years later in the No. 22.

One of the most-discussed transactions in NASCAR last season was the great crew chief swap at Team Penske, Jeremy Bullins, Todd Gordon, and Paul Wolfe all moving to different pit boxes. All things considered, the gambit paid off, especially in a season where on-track activities were mostly limited to the race itself.

Logano won two of the first four races of the 2020 season at Las Vegas and Phoenix before the coronavirus-induced pause put things on hold. Once things rebooted, it took a while for Logano to regain his form, but Ryan Blaney took the June race at Talladega while Keselowski won at Charlotte, Bristol, and New Hampshire, allowing all three Penske cars entry into the playoffs.

While Blaney was eliminated after the first round, Keselowski won a playoff race at Richmond and finished no worse than sixth in the three-race semifinal. Logano regained his championship and advanced to title contention at Phoenix with a win at Kansas (also winning that venue’s summer event). The No. 22 would lead all but two of the first 119 laps at the finale, but the Penske duo proved to be no match for champion Chase Elliott. Keselowski was the runner-up while Logano came home third.

Keselowski has quietly amassed quite the ledger since the 2016 season. He has won at least three races in each of the five seasons and has been in contention for the championship twice in that span. True to form in terms of showing up when it “matters”, Keselowski noted to the media this week that, after winning the 600-mile event in Charlotte last year, he has victories in each of NASCAR’s supposed “crown jewel” races…with the exception of the season-opening Daytona 500. The others are considered to be at Charlotte, Darlington, Indianapolis, and Talladega.

“Iâ€™m one crown jewel away from having them all, which is really cool and special for me,” he said. “It means a lot to me personally, so thatâ€™s definitely on the list is trying to get Daytona to come together and not get wrecked, but I think the team is pretty good and really happy with a lot of people Iâ€™m working with. Jeremy has got an incredible attitude that is really healthy for our team and it was a really fresh, new challenge for me personally last year. I still have hunger and eagerness to achieve more results and that opportunity is coming up real quick here in the next few weeks, so nothing is taken for granted. Everything has to be earned.”

Keselowski’s fate was one of the most talked-about rumors in NASCAR last season, as many felt he was destined to return to Hendrick Motorsports to take over the No. 48 Chevrolet that Jimmie Johnson was set to leave behind. But Keselowski re-upped with Penske for at least another year and there’s little to suggest that the relationship has deteriorated. Keselowski was particularly enthused by his relationship with Logano, as the two have collaborated in each of the last nine seasons.

“He immediately made me a better driver with a number of weaknesses I had,” Keselowski said of Logano. “I donâ€™t think I was a very good qualifier. The things I was doing on the plate tracks some were good and some were bad, and he taught me a few good habits. He definitely made me up my game on restarts, so overall I think heâ€™s made me better and I would hope that he would feel the same way that I challenged him to be better in other ways. So, I think thatâ€™s ultimately what would be your goal, is that you would have two teammates that make each other better.”

It’s hard to complain about Blaney’s Cup Series career. The son of sprint car legend Dave, Blaney’s first win ended Wood Brothers Racing’s 16-year winless drought at non-superspeedway tracks. Last season, his win allowed him to become the first driver to win consecutive races at Talladega since Jeff Gordon swept the 2007 set (also becoming the first Ford representative to pull it off since Buddy Baker in 1975). He led a career-best 668 laps last season, good for seventh in the Cup Series and just ahead of defending champion Kyle Busch. But Blaney struggled throughout the summer, earning only a single top five finish in the 13 races after Talladega. Those struggles followed him into the postseason, and he was a surprise first-round elimination. Blaney did manage to close things on a strong note, earning top tens in all but one of the last seven races (including a runner-up at the penultimate race at Martinsville).

Blaney knows that it’s time to show more, especially if he wants to solidify his status as one of the faces of NASCAR.

“Iâ€™m 27. Itâ€™s time to get rolling here and winning multiple races throughout the season and try to make it to the (final four),” Blaney said. “Thatâ€™s something I havenâ€™t done yet, so itâ€™s definitely time to step up and I think we have all the right tools in place to do so, itâ€™s just about applying all of them and really capitalizing on moments. Great athletes and great players, they capitalize on big moments. Thatâ€™s just what we have to put in our heads and put in our minds.”

It feels like only yesterday that Logano entered the Cup Series with the nickname “Sliced Bread”. The Middletown, Connecticut native has more or less lived up to the hype behind such a name, winning the 2018 title and finishing no worse than fifth in each of the last three seasons.

Logano is ready to race “anything” as he goes into his 12th season on the full-time circuit. The biggest change in his repertoire has been his on-track confidence, which he spoke about in detail earlier this week. He’s also thankful for the tough times that have gotten him to this point in his career.

“As a younger driver or someone coming in, I went through (tough times) where I got my butt kicked and came in very confident thinking I was gonna be the man and then quickly realized I was not even the boy,” he said. “I was in trouble and being able to kind of overcome that has really helped me a lot now. Iâ€™m glad Iâ€™ve gone through that. Those are the experiences that I absolutely love that I had because itâ€™s made me into who I am today, but in the moment itâ€™s hard. Itâ€™s not fun, but it makes you stronger for sure.â€

Penske will field a part-time third car for Cindric, the defending Xfinity Series champion. Cindric will protect his title in Penske’s No. 22 Ford before joining the Penske-affiliated Wood Brothers in 2022.

While Cindric’s full schedule is subject to change, he will definitely attempt to reach the Daytona 500 through the 150-mile qualifying events on February 11, three days before the engines fire for the main event. Cindric won’t be the only talented name fighting for a spot. He’ll be joined by fellow Xfinity finalist Noah Gragson and former Truck Series runner-up Ty Dillon, all while preparing for the 300-mile Xfinity opener on the same weekend.

“I think you always as a race car driver, whether you have a good year, a bad year, or the best year, you have to continue to better yourself whatever that level is because everyone else around you is gonna keep stepping that up,” Cindric said of his 2021 goals. “I have some great opportunities to run some Cup races and get a taste for what it means to race against the best, because ultimately thatâ€™s what I want to be one day, is to race against the best and the best of the best.”

Keselowski and Logano will be constant contenders in 2021 and no one would be surprised if they reprised their roles in the final four. The real wild card is going to be Blaney, and if he can take the next step in his development. Winning multiple races, preferably prior to the playoffs, would be a great display of power, and there are high hopes he can do it relatively early. Blaney was the runner-up in last season’s Daytona 500 and placed third at Homestead-Miami, the site of the third event of the year.