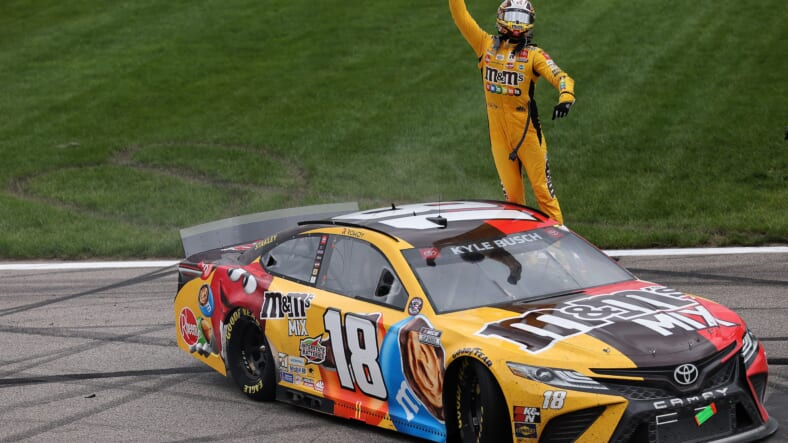 After finishing second in both the Camping World Truck Series race and the Cup Series race on Saturday, Kyle Busch was finally able to turn his bad luck around, winning the Explore the Pocono Mountains 350 in the NASCAR Cup Series on Sunday.

However, this win was certainly no cakewalk for Busch and the No. 18 team. Sunday’s race turned into a typical Pocono fuel mileage race, as well as Busch having to deal with a broken transmission for the majority of the race.

“I was just rolling around under yellow, scrubbing my tires, getting ready for the restart, and it popped out of gear,” Busch detailed. “When we took the green on the restart, everything was fine, shifting into gears, getting into fourth was fine, and then I’m holding it down the backstretch and chaos ensued….. the next caution comes out, I go to hit the shifter to see what’s wrong with it, and it’s stuck. Like it’s welded in fourth gear”.

Busch made trips down pit road for his crew to try and fix it, however, the team was unable to get the car out of fourth gear. The No. 18 car was forced to lay back on restarts due to lack of acceleration, but the car’s overall speed propelled Busch up with the leaders.

After cycling through from his final pitstop, Busch sat in fourth place with eight laps to go. The leader at the time was the No. 2 car of Brad Keselowski, however, he was forced to pit early and surrender his lead.

“We ran a really good race, but didn’t have enough fuel to make it to the end,” Keselowski, the third-place finisher said. “They beat us on power and fuel mileage, so we have a lot of work to do to keep up with those guys”.

William Byron assumed Keselowski’s lead when Keselowski was forced to pit on lap 132. He maintained the lead until three laps remained when Byron ran out of fuel himself.

“The goal for half the run was to run hard and get everyone else to pit and [then] we’d have to pit for less time,” Byron said. “Sometimes it hurts to have a fast car because you burn more fuel”.

Byron made it to pit road on fumes and was able to get back on the track for a 12th place finish.

After Byron ran out of fuel, Denny Hamlin landed in the catbird seat. Hamlin remained the leader for just over a lap when he ran out of fuel with two laps to go. That set up Busch to take his second victory of the season and his fourth in his Cup Series career.

Overall, it was a much improved day for Toyota teams, as all four Gibbs cars showed speed and both Hamlin and Busch were in contention for both Cup Series races this weekend. Martin Truex Jr. led 19 laps on Sunday and Bubba Wallace registered his first top-5 with 23XI Racing, all while team owner Michael Jordan was in attendance.

“[Jordan] understands,” Wallace said. “He wants to win, but he knows what it’s going to take for us to get there. It’s more from me, more from the team, it’s a more group effort. He’s in the background watching it and enjoying it….we’ll just keep plugging away forward”.