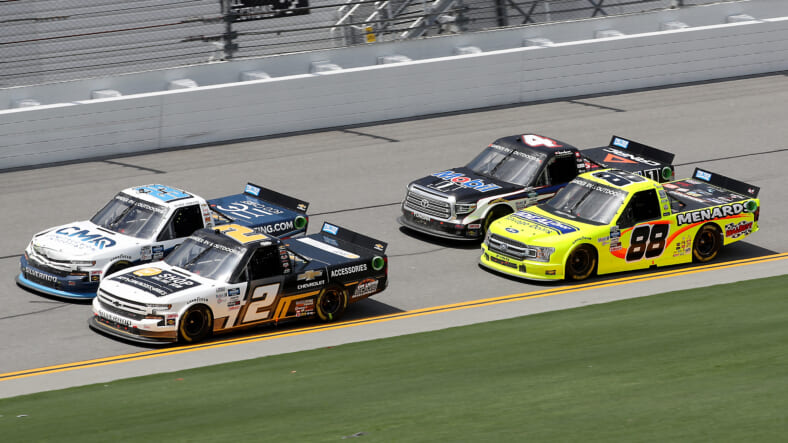 The NASCAR Camping World Truck Series gets underway on Friday night in Daytona. Here’s what you need to know about the upcoming season.

Known for his exploits on short tracks, 23-year-old Sheldon Creed rose to the occasion in the playoffs, ruining the party for seasonal favorites like teammates Zane Smith and Brett Moffitt. Creed, driver of the driving the No. 2 Chevrolet Silverado for GMS Racing, finished no worse than 12th in any of the seven postseason events, coming home in the first couple in four of them. His trademark aggressiveness from his ARCA days, which included the 2018 championship, wore thin during his first year in Trucks, but he cleaned up his style to take home another championship. He’ll seek to become the series’ first repeat champion since fellow finalist Matt Crafton (2013-14).

Having worked with GMS since 2018, Creed is an elder statesman of sorts with the organization that has placed a driver in the top three of the standings in every year since 2016. GMS will also welcome back Smith in the No. 21 and Tyler Ankrum in the No. 26. Raphael Lessard, the first French Canadian winner of a NASCAR national series event at Talladega last fall, joins the No. 24 truck, while rookie Chase Purdy takes over the 23 from Moffitt, the 2018 Truck champion who will drive for Niece Motorsports this season.

To the naked eye, Kyle Busch Motorsports enjoyed another successful season. The team won five races (including three from Busch himself) but the team failed to place a car in the top three of the final standings for the second straight year. That seems like heavy expectations, but they did so in each of the previous five seasons.

Busch’s Toyota Tundras appear set to return with a vengeance with a new full-time lineup. Fresh off a full season in the Cup Series, John Hunter Nemechek will take over the No. 4 from Lessard. The son of NASCAR staple “Front Row Joe”, Nemechek has eight Truck Series wins under his belt and earned 15 finishes in the top 20 in mid-tier equipment at Front Row Motorsports on the Cup circuit. Chandler Smith will join the full-time circuit in the No. 18 after displaying major promise over parts of two seasons. Smith earned a runner-up posting in his third careerÂ  Trucks event in 2019 and he would earn top fives in all but one of his final six races last season. Busch and Joe Gibbs project Brandon Jones are set to share the No. 51 Tundra with names to be determined.

The Truck Series has seen its share of regular female drivers, including Jennifer Jo Cobb (who has run her race team for over a decade) and Natalie Decker (fifth-place finisher in last year’s Daytona opener). But there has been a fair amount of hype behind the 19-year-old Deegan, who will make her full-time Truck Series debut in a Ford F-150 owned by NASCAR veteran David Gilliland.

Deegan has had her share of ignominious moments away from the track, but there is no denying her talent on it. She earned three victories over two years in what is now the ARCA Menards Series West and placed third in the regular ARCA standings in 2020, earning Rookie of the Year honors (17 top ten finishes in 20 races) and a third-place finish in the standings. The daughter of former X Games star Brian Deegan made her Trucks debut last fall at Kansas, coming in at a respectable 16th in her first race. She will compete for Rookie of the Year honors against Smith, Purdy, Carson Hocevar, and Kris Wright.

Unfortunately for 17-year-old Sam Mayer, his first R-rated movie in the theater was erased due to the ongoing health crisis. But it’s safe to say that he picked up a far more attractive consolation prize in the Camping World Truck Series.

Mayer not only won 11 races on the various levels of ARCA last season, but took the Truck Series by storm in GMS equipment. Three races after earning his first career top five at Gateway, Mayer took home the win at Bristol in August. He’ll return to the circuit this year with Henderson Motorsports, sharing the No. 75 Silverado with Parker Kligerman. Mayer will also run a part-time Xfinity Series slate with Dale Earnhardt Jr.’s race team, which will become a full-time ride in 2022.

Kevin Harvick’s dominant run for naught at the Cup level wasn’t the only jaw-dropping season rendered null-and-void by the playoffs last season. Austin Hill, fresh off the momentum of winning three of the final eight races in 2019, finished no worse than 12th in all but one of the first 16 races of last season. However, engine woes at the penultimate race of the season at Martinsville kept him on the outside of the final four going into Phoenix, relegating him to a sixth-place finish the No. 16 Hattori Racing Enterprises Toyota. It’ll also be interesting to see if his Xfinity Series output increases in HRE’s No. 61, as he earned his first career top five in the car at Kansas last season.