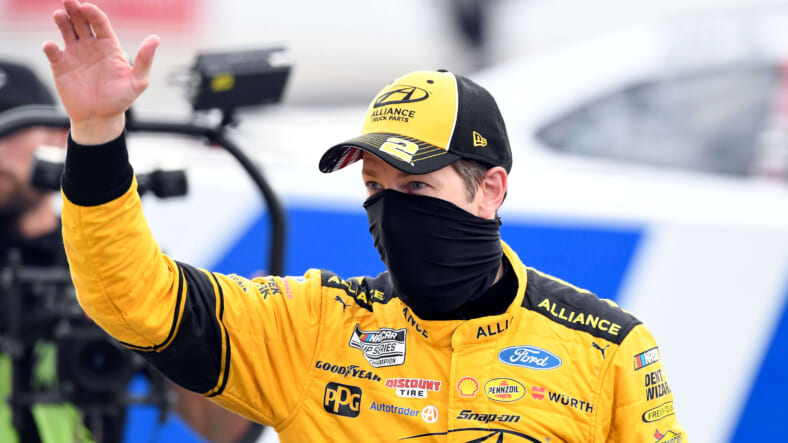 The 2012 NASCAR Cup Series champion reflected on the past while veering toward a fast present and future leading into Sunday’s Kansas event.

Not long ago, Brad Keselowski was NASCAR’s prodigy, leaving the racing world waiting with bated breath to see his next move. Keselowski earned his first win at the premier Cup Series level in just his third start…more than a full calendar year before he took home the NASCAR Nationwide (now Xfinity) Series title. When the legendary Cup garages at Hendrick Motorsports provided no vacancy, Keselowski moved to another beacon of motorsports royalty in Team Penske. After his rookie season, Keselowski took over team owner Roger Penske’s famed No. 2 Ford (a car previously piloted solely by past champions Rusty Wallace and Kurt Busch) and drove it to a title in 2012, his third full season of racing. Three years later, he made his feature film debut, uttering the outlandish subtitle ofÂ Sharknado 3: Oh Hell No!.Â

Now, it’s Keselowski who’s being sought after for advice to the younger drivers in the Penske stables…and not for acting advice.

Keselowski’s ongoing run for a second title comes at a busy time in his team’s stables. Through its technical partnership with Wood Brothers Racing, the team’s Xfinity Series driver, Austin Cindric, is set to make his full-time Cup Series debut in the Woods’ famed No. 21 Ford. Some have seen Cindric as the ultimate successor to Keselowski in the No. 2. He and the No. 22 Penske Xfinity team are in the midst of battling for that title after five wins this season.

“When I was in his spot in the sport there was a part of me that thought this was gonna last forever. It doesnâ€™t,” Keselowski said of the best piece of advice he’d off Cindric. “The biggest advice I can give anyone like him is to soak it up. Itâ€™s probably the one and only time in your life that youâ€™ll have a chance to run for your first NASCAR championship and itâ€™s a unique feeling, itâ€™s a special feeling.

“Itâ€™s a little bit like going to the Senior Prom. You only get one shot at a first championship or at least your first effort at it, and there are some things that probably arenâ€™t gonna go your way and hopefully, there are some things that do, but you only get to do it once, so enjoy the ride. As far as the technical stuff, heâ€™s got that. He doesnâ€™t need any help from me.â€

Keselowski was speaking earlier this week in the lead-up to Sunday’s Hollywood Casino 400 at Kansas Speedway (2:30 p.m. ET, NBC). Keselowski is one of eight drivers left in championship contention, sitting in third place as the Cup Series playoffs kick off its final elimination round. Four drivers will be eligible for the championship finale in Phoenix on November 8. A win over the next three races clinches a spot at the championship table for Phoenix, though Keselowski is currently 13 points ahead of teammate and Sharknado co-star Joey Logano in terms of making it on points.

But Keselowski isn’t concerned about points, at this rate. It’s hard to believe, but 2020 marks the 36-year-old’s ninth playoff trek, having reached the playoffs in all but two of his full-time seasons. With that experience and a title under his belt, he knows what it takes to survive in NASCAR’s postseason era.

Keselowski looked at his 13-point advantage over Logano only in terms of race day…meaning 13 points could be erased in the first two stages of the race.

Since NASCAR’s playoffs switched to an elimination format in 2014, Keselowski has made it to the championship finale once (when it was held at Homestead-Miami Speedway), doing so via point in 2016. But he knows how important a win can be in the semifinal opener. In two of the last four seasons, the winner of the Round of 8’s opener has gone on to win the championship (Jimmie Johnson in 2016 and Logano in 2018).

“I donâ€™t think itâ€™s a complete coincidence,” he said. I think itâ€™s a big advantage to win the first race in this semi-final round of the playoffs, but with respect to that it gives you a lot of time to prepare for the final race and I think thatâ€™s never a bad thing. Whether thatâ€™s allowing your team to kind of relax a little bit and focus on one car rather than three other cars to build, or engineering.”

Another Keselowski protege, Chase Briscoe, got to experience that phenomenon firsthand on Saturday night. With a dominant win in the Xfinity Series’ Kansas Lottery 300, Briscoe has earned a spot in the lower-tier playoffs’ championship quarter. Briscoe, currently driving No. 98 Ford Stewart-Haas Racing’s Xfinity endeavors, got his NASCAR start at the now-defunct Brad Keselowski Racing.

Through his self-funded race team, Keselowski, whose early career included help from Dale Earnhardt Jr., paid the favor of NASCAR advancement forward through Camping World (now Gander RV & Outdoor) Truck Series seedings. Cindric and Briscoe each earned their start with the team, as did teammate Ryan Blaney. Other notable names to drive Keselowski trucks include Ross Chastain and Tyler Reddick.

Keselowski remarked while he’s happy with his current situation, he “would certainly entertain” reopening BKR, potentially as a Cup Series team. The unit suspended operations after the 2017 season. His approach to a race team could well have been foreshadowed in describing his preview of the Round of 8.

“In some ways, itâ€™s less stressful because you feel like you can control more of your own destiny,” Keselowski said of the Round of 8. “You can never control all of it, but more of it. That said, there are some really good teams, really good performers, and the other side I guess if youâ€™re playing Devilâ€™s advocate thinks to himself, â€˜Hey, Iâ€™m really gonna have to step up and deliver in this round because nothing by chance is gonna work in my favor.â€™ So the rounds certainly have different feels to them, but I struggle to quantify if they feel easier or harder. I just feel like they all have their own challenges.â€

The No. 2 Ford will start eighth on Sunday. Keselowski recently came home in the runner-up spot in the previous race at Kansas this summer, and has earned two wins at the 1.5-mile tri-oval, the most recent coming in last spring’s visit.