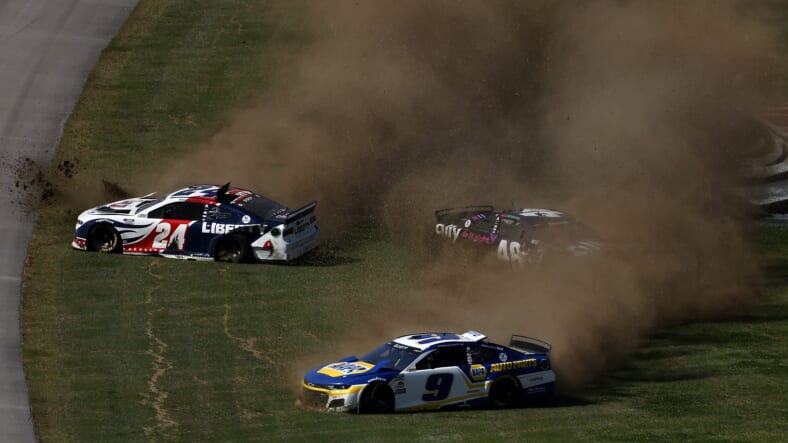 Brad Keselowski took home a wild overtime finish in the NASCAR Cup Series at Talladega Superspeedway, his sixth win at the track.

Brad @Keselowski WINS as they crash behind him at Talladega! Retweet to congratulate @Team_Penske and the No. 2 crew. pic.twitter.com/3SCDHAgocM

Working overtime on Sunday paid off for Brad Keselowski.

The No. 2 Team Penske Ford stole a wild finish at Talladega Superspeedway’s GEICO 500, passing Matt DiBenedetto on the final lap to earn his 35th victory in the NASCAR Cup Series. Sunday’s race was extended for a two-lap overtime shootout after debris from Martin Truex Jr.’s Toyota brought out a yellow flag. William Byron beat out Daytona 500 winner Michael McDowell for the runner-up spot, while Kevin Harvick and DiBenedetto rounded out the top five.

Keselowski has now earned at least one win in 11 consecutive Cup Series seasons, one of only 16 drivers to hit that mark at the premier level. He also has six wins at Talladega, leading all active drivers and tied for second-most all-time with Jeff Gordon and Dale Earnhardt. Jr. The all-time record is held by Dale Earnhardt Sr. with 10.

“I grew up loving the sport, still love the sport. We fight like husband and wife, but I still love the sport…It’s a hard sport. Any success you have means the world. To have my name on any list…that’s a pretty big deal,” Keselowski said after the win. “Dale’s record is so far out there. Yeah, I have a shot at it, but it’s a distant shot. You have to get to seven before you even think about ten. But it’s still cool to be on the same list as him.”

Sunday offered a bit of redemption for Keselowski after a heartbreak end to the season-opening Daytona 500, another prestigious superspeedway event. Late contact with teammate Joey Logano led to a race-ending wreck that allowed McDowell to sneak away with a victory.

The path to the final lap, the only lap Keselowski led on Sunday, was paved with typical fireworks usually associated with Talladega. Drivers were able to avoid creating “The Big One”, but the end of the first stage was marred by a big wreck that ended with Logano’s No. 22 Ford getting airborne while fighting for the lead. Logano was unharmed but called for changes to the racing package after landing on his roof. He compared the devastating airborne crash Ryan Newman suffered at the end of last season’s opener at Daytona.Â

“I’m wondering when we’re going to stop because this is dangerous doing what we’re doing,” Logano said after the wreck. “I got a roll bar in my head. That’s not okay. I’m one hit away from the same situation Ryan Newman just went through. I just don’t feel like that is acceptable. A lot of it is the big spoiler and the big runs and all the pushing. It’s nobodyâ€™s fault…It’s a product of this racing. We have to fix it though.”

DiBenedetto ended up winning the first 60-lap stage and remained at or near the front with Keselowski and Ryan Blaney. His No. 21 Wood Brothers Racing Ford took the lead from Erik Jones on lap 177 of 188 on a restart after Quin Houff hit the wall and brought out a caution. He held the lead with assistance from Ford teammates Keselowski and Blaney (whose Penske team also works with WBR through a technical alliance) but the field was pushed back together when Truex lost a tire, setting up a green-white-checkered finish.

The No. 21 led the penultimate lap, but Keselowski got a strong push from the Ford of McDowell to earn the win. As the field wrecked behind them, Keselowski took home his first win of the season, becoming the ninth victorious driver in ten races.

“I saw he was getting a run and I just prayed I got to the start/finish line before it was too late,” Keselowski said of McDowell’s final push in the end. “Matt went to block (Blaney) and I just barely got inside of him with a huge run.Â  I got a great push from Michael McDowell, which was really helpful and appreciated, so just a big day.â€

As for DiBenedetto, he’s left with yet another moral victory. Having developed himself as a fan favorite after picking up respectable finishes in subpar equipment, DiBenedetto is still searching for his first Cup Series win after 222 career starts. He’s in a lame-duck situation in the No. 21, which is set to welcome in Penske’s defending NASCAR Xfinity Series champion Austin Cindric next season.

But DiBenedetto is instead opting to focus on the positives gleaned from Sunday’s events. After a brutal start to the season (sitting 34th in the standings after the third event of the season at Homestead-Miami), the No. 21 Ford has earned seven straight top 20 finishes and has failed to complete only one lap. He’s currently the first driver out of the current playoff bracket, 12 points behind current co-holders Chris Buescher and Ricky Stenhouse Jr. DiBenedetto’s stage win was his first in a points race, previously winning the last one in last summer’s All-Star Open to go to the main exhibition event.

“It was a solid day. We’ll take a top five and had a stage win, so thatâ€™s great,” he said. The car was really fast. All the Fords were super good. That was awesome. Our car led great. Ryan really pushed. Our Penske teammates did an excellent job helping us get that stage win, so that was huge. Big credit to them and big for our points situation, so just tough ending.Â  I jumped up in front of Ryan and he kind of got spit out and hung out and some people were grabbing his quarter panel and such.â€