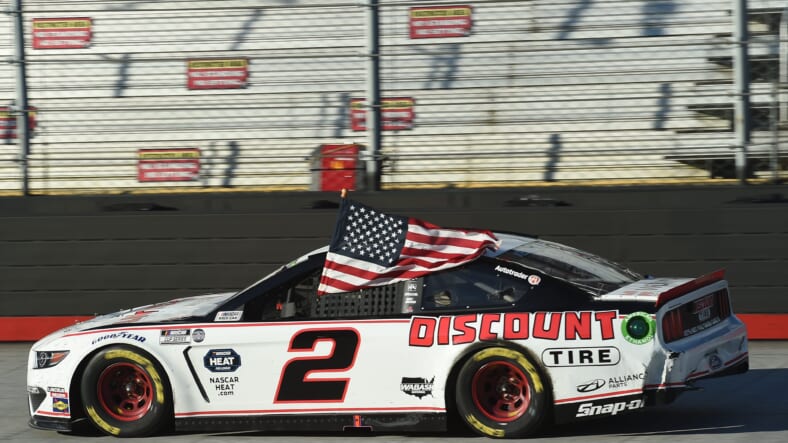 It was deja vu all over again for the NASCAR Cup Series on Sunday. Whereas Brad Keselowski welcomed it with open arms, Chase Elliott probably could’ve done without it.

Keselowski once again benefitted from Elliott’s misfortune at Bristol Motor Speedway. When Elliott’s battle for the lead with Keselowski’s teammate Joey Logano ended in contact, Keselowski took advantage, passing them both to win the Supermarket Heroes 500 presented by Food City.

“Just a wild, wild day,” Keselowski said in a postrace conference call hosted on Zoom. “One of those days that you look at and you think of going back, being a part of Bristol lore for a long time to come.Â Â Glad we were able to win it.”

“So much beating and banging, oh my goodness.Â We’ve all been cooped up in our houses too long, came to Bristol and took out some aggression I guess.”

Last Sunday, Keselowski won the Coca-Cola 600 in Charlotte on Memorial Day weekend after Elliott’s puzzling decision to pit prior to a two-lap overtime shootout. This time, it was a pit decision from Keselowski’s crew that put him in position to win a wild showdown in Tennessee.

Awarded the pole position from a random draw, Keselowski led 117 of the first 203 laps before getting caught in the middle of the pack while Elliott took home playoff points by winning the first two stages of the 500-circuit event. Keselowski was able to keep his car relatively clean in a race that featured 17 caution flag incidents. When Gray Gaulding hit the wall with 41 laps to go, Keselowski was one of a select few to visit pit row for fresh tires. He made the fateful stop at the advice of crew chief Jeremy Bullins and hoped to salvage a top ten finish with the adjustments.

“Jeremy called a really good race,” Keselowski said. “I’m super proud of him and this team, the way they’ve come together, and keep coming together.Â Â It’s a special group.Â Â I feel like we’re all trying to find each other’s full potential.Â Â We’re just starting to do that. We were getting real close to that before the pandemic happened.Â Â Kind of slowed us down.Â Â Now we’re really pushing each other hard and that’s a very good thing.”

Further incidents allowed Keselowski to think bigger. A multi-car incident that took out several contenders (including Martin Truex Jr. and Aric Almirola) moved the No. 2 into the top ten. When leader Denny Hamlin got bumped but Logano with ten laps to go, Keselowski had moved into fifth and was in prime position to take the victory.

Antics between Elliott and Logano allowed him to do so.

Elliott and Logano broke away from the pack when the race got back underway with six laps to go. The two pounded away at each other until a little too much tension had them both rubbing against the wall. Keselowski scooted past the chaos to take home his second win of the season and the 32nd of his Cup Series career.

“I think with 41 to go, I was quite honestly just hoping to get a top ten,” Keselowski recalled. “Once we broke in the top 10 I thought, I have a real shot at the top five. Next thing I know we’re running fifth.Â Â I think the 11 car got turned around, something happened there. Now we’re running fourth. Now we have the preferred lane on the restart.”

“Then the restart we clear and get third.Â Â I’m watching Chase and Joey (thinking) this is not going to be good. It was just such a turn of events.Â  I felt like I was sitting in Vegas, playing poker, and I got all the turns. They call it the river. All the turns went my way. I went from having a bad hand to having a full house real quick.”

The tension between Elliott and Logano capped off an eventful day at Bristol, the 0.533-mile short track known for close racing, big wrecks, and flared tempers. Several big wrecks removed several big names from the proceedings. Another Keselowski teammate, Ryan Blaney, saw his day end on a disastrous spin during the second stage, putting his No. 12 Ford on a collision course with Ty Dillon. Blaney had been running second and chasing down Keselowski for the lead at the time. The race was also briefly paused at lap 231 to clean up a big wreck that collected several cars, including those of Ricky Stenhouse Jr., Alex Bowman, Kurt Busch, and Tyler Reddick.Â

Logano and Elliott respectively finished at the tail-end of the lead lap in the 21st and 22nd positions. The two confronted each other on pit road after the final incident and were able to keep things civil. It’s the latest chronicle in a roller-coaster return to racing for Elliott. The No. 9 Hendrick Motorsports Chevrolet has been in the top three during the final ten laps of each of the past four Cup Series races. Elliott was able to earn a win at the second half of a Charlotte doubleheader last Thursday, but incidents with Kyle Busch at Darlington and now Logano at Bristol have marred an otherwise stellar year.

The NASCAR Cup Series will now go through a customary full week off before returning to action next Sunday for Atlanta Motor Speedway’s Fold of Honors QuikTrip 500 (3 p.m. ET, Fox).