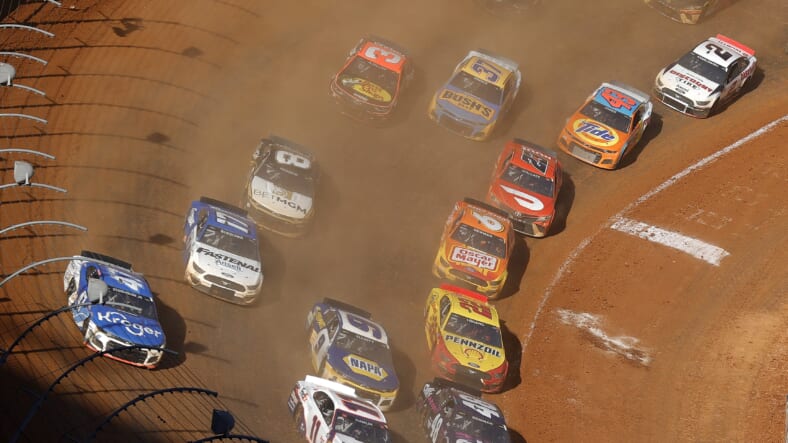 NASCAR returns after a week off for Easter, but the world can’t stop talking about Bristol’s dirt endeavor.

To put things in layman’s terms…or at least those in terms familiar to those away from the racetrack…two of NASCAR’s national series running on dirt installed at Bristol Motor Speedway would perhaps be best compared to the NHL Winter Classic.

Through dirt and simulated pond ice, the two events harken back to the competitors’ earliest days of participation in the sport. With their fledgling days long behind them, they’re placed in settings long-forgotten and far removed from the usual professional setup: dirt tracks and the great outdoors. The NHL has since expanded the original outdoor trip, begun in Buffalo in 2008, to numerous open-air events, the most recent being a four-team excursion to Lake Tahoe in February. A similar attempt to make things annual has already been announced, as the track will be re-dirtied come 2022.

NASCAR returns from an Easter break this Saturday, as the Cup Series resumes at Martinsville Speedway on Saturday night (7:30 p.m. ET, FS1). Yet, the Bristol dirt event, won by Joey Logano, remains the talk of the motorsports world. Little has been done to curb the conversation: the return trip to the dirt was announced while the original event was ongoing.

Make It a Night Race

Enough can’t be said about the job that NASCAR and Bristol’s crew did during the race weekend. They recovered from torrential rains in the Sullivan County area to put on an entertaining doubleheader on Monday between the Cup and Camping World Truck Series.

One problem that stood out, however, was dusty conditions that led to a slew of caution flags and wrecks in the premier Cup event. The dust issue was only exacerbated by late afternoon settings that left drivers temporarily blind in certain areas of the track.

“For fans’ sake, for visibility of the drivers’ sake, I think a lot of the wrecks happened because of the dust and we couldn’t see anything,” the Cup Series’ third-place finisher Denny Hamlin noted.

Future dirt events could benefit from prime time settings at night. For as many changes that the current schedule has made, the current Cup slate is surprisingly low on night races: only three more on the pre-playoff ledger (Martinsville, Charlotte, Daytona) before each of the first four postseason events commence after sundown.

Bristol is already well revered for its night event (set to close the opening round of the playoffs). Putting the dirt race at night, much like the Truck Series did for its proceedings at Eldora Speedway (2013-19) could truly give the event a nationally recognizable feel and create fair, workable, competitive racing.

“I do think that racing at night is the key to this,” Logano said. “I think that brings some of the moisture up from the dirt. I think that would help. Plus you don’t have the sun glaring through the dust. That’s what made it really hard through turns one and two. You couldn’t;t see.”

When the Winter Classic was introduced, they didn’t keep things eternally situated in Western New York. Outdoor hockey fanfiction could write a whole book, with the aforementioned Lake Tahoe setting being the most ambitious to date. NASCAR can benefit from a similar change of pace.

The NASCAR schedule has been through plenty of (welcome) upheaval as is. Bristol’s dirt edition is the first of five weekends where the Cup Series will make its maiden voyage (the next being the May 23 event at the Circuit of the Americas in Austin). But it’d certainly be interesting to see what other tracks, perhaps Bristol’s fellow short circuits like Martinsville and Richmond, would look like in new settings.

Over the past year, we’ve seen drivers adapt well to fresh asphalt, whether it’s running well on new tracks like Bristol covered in dirt or Daytona’s road course. Logano feels like his fellow drivers would be able to solve the quandary of other venues, much like he was able to at Bristol.

“The amount of good racing we saw (at Bristol) throughout the field in very challenging conditions, a very slick track, and very dusty, you can’t even see where you’re going, you saw guys that never even raced on dirt be pretty good. It goes to show that the talent in this NASCAR Cup level is something else.”

Dirt racing has been introduced to the Cup Series at an interesting time. This season will be the final campaign where drivers run the Gen-6 car, as the “Next Gen” unit (featuring wider, single-lug nut tires, a new chassis, and independent rear suspension) is set to debut next season after the ongoing health crisis pushed things back a year.

Team Penske competition director Travis Geisler, whose No. 22 Ford was piloted into victory lane by Logano, noted just how important getting the Next Gen setup right would be in 2022, especially with the dirt race potentially retaining its early spot in the Cup schedule.

“If this car was a challenge, it’s going to be a whole other set of challenges. Certainly early in the season for the whole industry, so we’ll still be kind of new to that car, which will make it even more challenging,” Geisler, a former Cup Series crew chief, said. Runner-up finisher Ricky Stenhouse Jr. suggested finding solutions for longer tire runs.

“Our Kroger Camaro was really good in the long run today. I didn’t have the short-run speeds I needed in those long runs. So hopefully with the package that we have when we come back, we can get those 75-lap, 100-lap runs,” Stenhouse, driver of the No. 47 JTG Daugherty Racing Chevrolet, said. “Next year is going to be just as much of a toss-up with a different race car.”

The circuit also has a year to review any changes they’d like to make to raceday procedures. While the Bristol event was a clean race, some elements certainly take some getting used to, namely the pit stops that took place during scheduled breaks through stage endings and competition cautions. The dust factor was combated by reverting to single-file restarts, which had been eliminated back in 2009.

The drivers adapted very well to the changes, but finalizing the setups and format should be imperative. There will be enough to get used to with the Next Gen making its official debut. If there’s one less thing to worry about, drivers and teams can focus solely on competing and building on what was already a strong showing.