Winner of UFC 264 main event next for the lightweight title 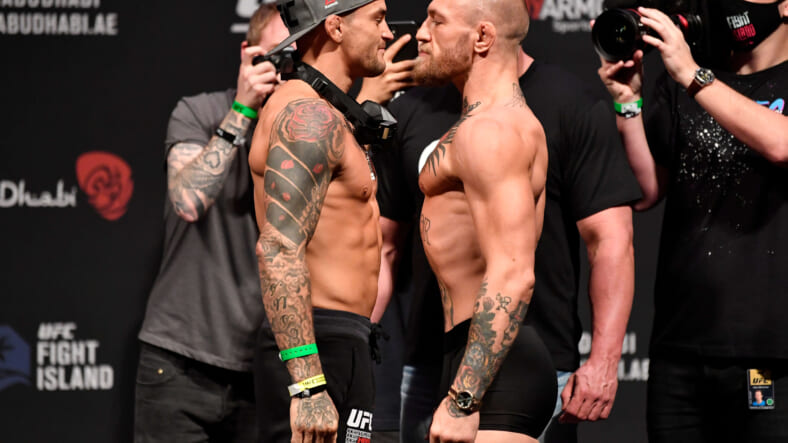 This weekend we will see one of the most highly anticipated matchups of the year in the main event of UFC 264. The trilogy between Conor McGregor (22-5) and Dustin Poirier (27-6, 1 NC) will come to a close.

The rivalry that started seven years ago will come to a close and there’s a lot on the line. Dana White confirmed yesterday with MMA Junkie that the winner of Saturday night’s main event will fight for the lightweight title next.

The new UFC lightweight champion Charles Oliveira (30-8, 1 NC) will actually be cageside for the main event. With this new wrinkle added in, arguably the biggest fight of 2021 has just become even bigger.

McGregor and Poirier met for the first time back in 2014 with McGregor getting the first round finish. The two men met again back at UFC 257 for the second time. After a hot start for McGregor, Poirier settled in and earn himself a TKO victory in the second round.

The series is even with both men having earned a finish leading into UFC 264. It’s going to be very interesting to see the approaches of both men on Saturday night. For McGregor, his mistake was very clear in the second fight.

I believe that the former two-division UFC champion was extremely confident that he would be able to finish Poirier with his boxing in the first round. However, Poirier was able to absorb the shots and attack McGregor’s lead leg with calf kicks.

With McGregor taking a boxing-heavy style in the second fight, he left his leg there to be compromised. In this third matchup, he’s going to need to return to the old style that he utilized when he was on the rise.

For Poirier, I think it’ll be important just to whether the early storm. Poirier is at his best when the fight gets long and tough. He said last week that he wins a war ten out of ten times against Conor McGregor. It’s going to be an incredible matchup with a ton on the line Saturday night.