Will Andrade or Chookagian be victorious at UFC Fight Island 6? 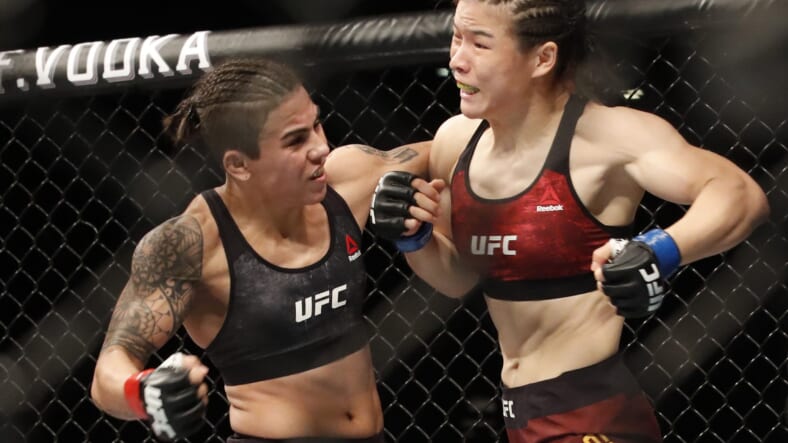 Former UFC strawweight champion, Jessica Andrade (20-8) will be making her flyweight debut. Standing across from the former champion is Katlyn Chookagian (14-3). Chookagian is coming off of a dominant win over Antonina Shevchenko.

This is a fantastic matchup for a number of reasons. Chookagian is the top ranked contender in the UFC‘s flyweight division. Despite being the top contender in the division, Chookagian has openly talked about the end of her fighting career. An interest wrinkle in tomorrow’s fight.

Andrade won the title at strawweight and she’s competed at bantamweight in her UFC career. This is the first time that Andrade will likely be competing in her natural weight class. She’s going to be very strong and very fast when she enters the cage tomorrow night.

I was very impressed with what I saw from Jessica Andrade back at UFC 251. Sure, she lost a decision to Rose Namajunas. However, it was the way that Andrade overcame adversity that impressed me. She was touched up early, but she just kept coming forward and hurt Namajunas late.

This is the first time she will be competing in a UFC weight class that feels natural for her. She should have extra energy and speed when she enters the cage tomorrow. Andrade is extremely well rounded, however, she’s known for her incredible power.

Chookagian was able to bounce back big time in her last contest. She used a wrestling heavy attack to stifle Antonina Shevchenko. The win was the third in the last four fights for Chookagian. She will be the much bigger fighter tomorrow night coming in eight inches taller than Andrade.

I think that Chookagian really needs to use her size tomorrow night. If she can stay on the outside and mix in some timely takedowns she can win a decision. However, I just don’t know if I see it. I love the flyweight move for Andrade, and I think her striking and speed wins out tomorrow night.