What’s next for Zhang Weili after UFC 268 loss? 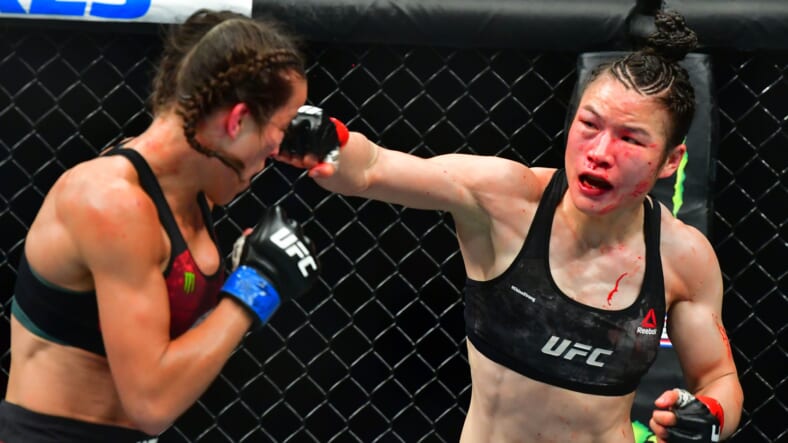 This past Saturday in the co-main event of UFC 268, we saw a rematch for the strawweight title. Rose Namajunas (11-4) was defending her title against Zhang Weili (21-3). The two had previously met at UFC 261 with Namajunas scoring a head kick knockout.

However, given how dominant Weili had been (winning 21 fights in a row), the UFC decided to give the former champion an immediate rematch despite the definitive result in the first fight. The general consensus was that these two were very close in skill and the first finish was more of a flash.

Personally, I thought we’d see an ultra competitive fight with Namajunas squeaking out a decision and that is exactly what we got. However, I underestimated how well Weili would do in the rematch. I figured she’d have her moments, but I didn’t think she’d do as well as she did.

In fact, watching it live, I scored the fight for Zhang Weili at UFC 268. I had her winning the first three rounds with Namajunas winning the last two. One judge saw the fight this way, however, two of the judges gave the fight and the victory to Rose Namajunas.

Despite losing at UFC 268, Zhang Weili shouldn’t hang her head. She put on a great performance and like I said, I scored the fight for her and many others did as well. However, there’s a clear argument for Namajunas winning so the decision isn’t a robbery by any stretch.

With two consecutive losses to Namajunas, where does that leave the former UFC champion? Well, she’s going to need to string together a few wins before a trilogy can make sense. She is going to have to force the UFC’s hand just like Valentina Shevchenko is doing with the Amanda Nunes trilogy.

With that, who should she take on next? There’s two opponents that make a ton of sense for Weili’s next fight. The first opponent is Marina Rodriguez (15-1-2). Rodriguez has impressively won three straight which has launched her to third in the strawweight rankings.

Given her style and still, the UFC couldn’t go wrong with booking her against Weili. I think the leader in the clubhouse for Weili’s next fight is a matchup with Joanna Jedrzejczyk (16-4). Jedrzejczyk was recently removed from the UFC rankings due to inactivity, but she’s still one of the very best in the world.

Weili and Jedrzejczyk had the Fight of the Year in 2020 and a rematch makes all the sense in the world. Both are former UFC champions and both have lost to Namajunas twice in virtually the same manner. First fight by knockout, second fight by close decision.

Something tells me the UFC might pass over Carla Esparza in favor of Marina Rodriguez, but that’s far from guaranteed, just something to watch. If I’m betting money, I say the UFC books the rematch between Zhang and Jedrzejczyk for sometime in the spring.