What’s next for Yoel Romero after his failed debut with Bellator? 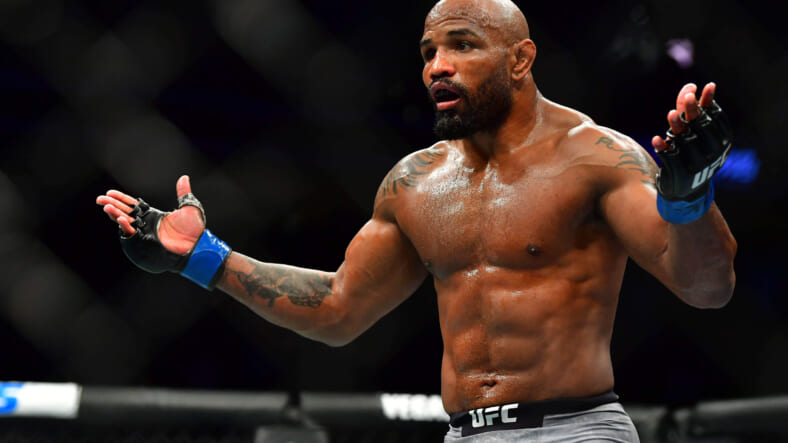 This past Saturday, Yoel Romero (13-6) made his highly anticipated debut at Bellator 266. Standing across from him was the former light heavyweight champion, Phil Davis (23-6).

Romero is a guy that just seems to defy father time. At 44 years old, Romero still is in incredible physical condition and he’s one of the most dangerous fighters whether he’s fighting at 185 or 205.

At Bellator 266, he was fighting in the light heavyweight division. Over the last couple of years, we’ve seen an interesting strategy from Yoel Romero when he fights. He waits and often stands flat-footed throughout the opening parts of the fight.

Now, he does this in order to set up his attacks. Romero has always been a guy who can explode into attacks with incredible power. He attempted to do this a few times against Phil Davis at Bellator 266.

With Romero being a former Olympic Silver Medalist in wrestling, he was always allowed to explode with crazy attacks and he never worried about getting taken down. However, he was taken down on Saturday night.

In fact, Davis controlled him for the majority of the final round. Romero never really got any offense going at Bellator 266 and he lost a decision. One judge somehow gave Romero the fight, but it’s obvious that Romero lost this one.

What’s next after Bellator 266?

It was a frustrating debut to watch if you were a Yoel Romero fan. He just never really pulled the trigger in the way that he’s capable of pulling it which is what cost him the fight in my opinion.

Romero was confused after the fight because he thought the main event was five rounds. However, in Bellator unlike the UFC, non-title main events are only for three rounds. That said, I don’t see how Romero was winning that fight if it went another two rounds.

So, what does the promotion do with Romero now. Well, there are a couple of options. They can see if he’d be willing to go back to middleweight or they could wait until Rumble Johnson is ready to compete again.

Romero – Rumble is a fight that everyone wanted to see. They were originally paired up in the Bellator Grand Prix, however, Romero had an eye issue that kept him out. Rumble has had to pull out of the Grand Prix with an illness.Â

All that being said, if Rumble can come back in early 2022, it should be against Yoel Romero.