What’s next for Paddy ‘The Baddy’ Pimblett after UFC London victory? 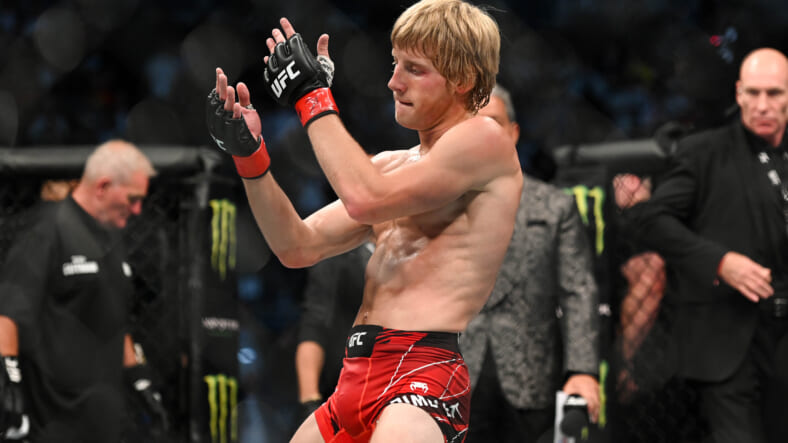 This past Saturday at UFC London, one of England’s biggest rising stars made the walk for the third time inside the octagon. Paddy “The Baddy” Pimblett (19-3) took on Dana White Contender Series veteran Jordan Leavitt (10-2).

This was an interesting matchup because it would test Pimblett out against a really solid grappler in Leavitt. Early on in the fight, Leavitt tried to use his wrestling and he did a decent job. The first round saw some nice cage control for Leavitt.

What’s next after UFC London?

This was a big win for Pimblett who is now 3-0 in the UFC. He said after the fight that he would likely no longer be fighting at the O2 in London as he saw himself transitioning to strictly PPV matchups for the promotion.

Honestly, I don’t think Pimblett is wrong here. I think we will see the PPV debut of Paddy The Baddy the next time we see him inside the octagon. With that in mind, who should the UFC book him against?

I think they need to step up the competition and give him someone with name recognition. Three wins in and it’s time for another test for Paddy The Baddy. He’s been called out by Mark Madsen, but I think the UFC will look for someone with bit more excitement.

I really like the idea of him potentially fighting Jim Miller next. Miller has won three in a row and he holds many records in the UFC. This would be a big jump up and it would give Pimblett the type of opponent he needs.

The winner of Jared Gordon – Leonardo Santos could be another option. The UFC had previously looked at booking Gordon against Pimblett. If Gordon get the win next month, he’d be 4-1 in his last five.