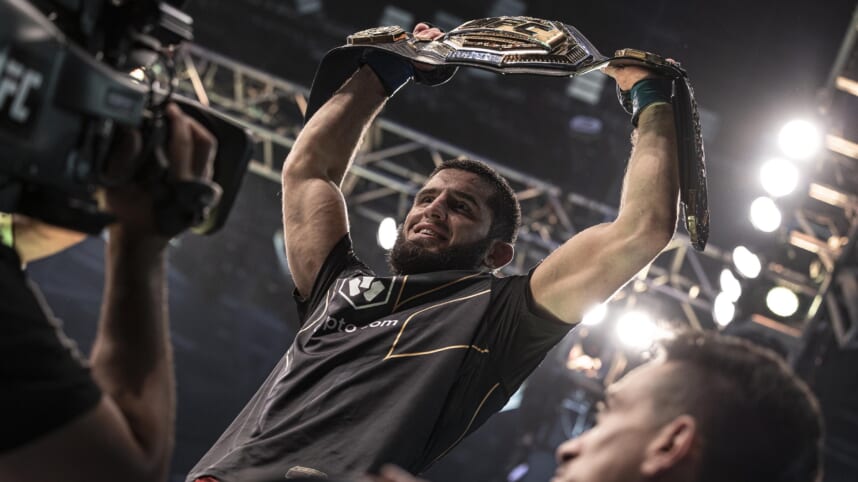 In the first round, Makhachev started out really strong landing a nice left hand. Both men were pretty even in the standup and then the fight hit the ground. Oliveira brought the fight to the ground by pulling guard. He immediately started working submissions, but it was evident that he was going to have issues pulling one off.

Makhachev’s top pressure was incredible. He didn’t mount a ton of offense, but his control was very good. In the second round, Oliveira wanted to strike with Makhachev. For the majority of the round, things were pretty even. Then, when Oliveira was going to throw a knee, he was caught with a flush hook that sat him down.

Makhachev was able to get an arm triangle choke. Oliveira looked to defend but the squeeze was too much. He was forced to tap and Islam Makhachev became the UFC lightweight champion.

This was a huge moment for Islam Makhachev and his mentor Khabib Nurmagomedov. They’ve believed that Islam has been the uncrowned champion for some time now and now he has the title to back it up. It was revealed at UFC 280, what’s next for Makhachev.

After the fight was over, featherweight champion Alexander Volkanovski entered the octagon. The two men talked inside the octagon and the writing is on the wall for the champion versus champion matchup.

The UFC is returning to Australia in February. It appears that the headliner for that will be Volkanovski challenging Makhachev for the lightweight title. In that bout, we will likely learn who the best pound for pound fighter in the world is.