What’s next for Derrick Lewis after knockout loss at UFC 277? 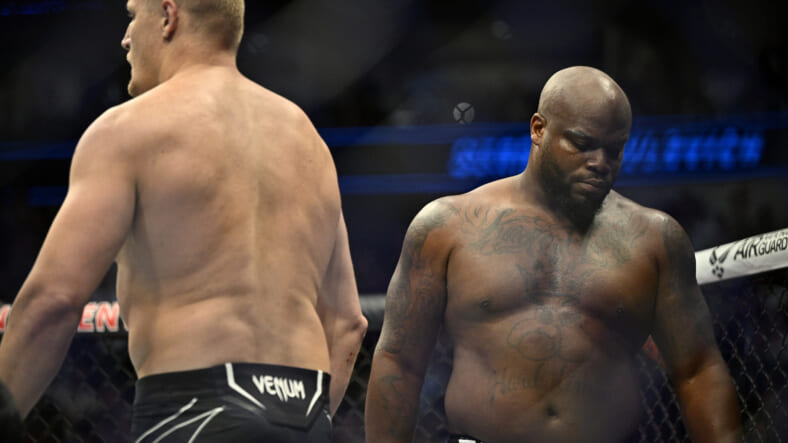 This past Saturday on the main card of UFC 277, The Black Beast, Derrick Lewis (26-10, 1 NC) returned to his home state of Texas. Lewis was trying to exercise his demons of fighting in his home state as he took on Sergei Pavlovich (16-1).

Lewis was trying to bounce back after his knockout loss to Tai Tuivasa at UFC 271. The last couple of years have been a tale of two locations for Lewis. The UFC’s APEX and the state of Texas.

When Lewis has fought at the APEX, he has three knockouts against Curtis Blaydes, Chris Daukaus, and Aleksei Oleinik. Meanwhile in Texas he’s 0-2 with stoppage losses to Tuivasa and Ciryl Gane.

Saturday night started out like a normal Derrick Lewis fight. Lewis was staying on the outside just waiting to pounce. Pavlovich pushed forward early and then Lewis attacked. He moved forward throwing major heat. However, he got caught with a clean counter that hurt him.

Pavlovich swarmed and landed a couple of clean shots. Lewis went down and the referee stopped the action. Immediately, Lewis popped up not even looking hurt as boos rained down at UFC 277.

Derrick Lewis is now 0-3 in his last three UFC fights in Texas. However, this fight feels a lot different. Yes, Pavlovich was getting the better of things, however, I don’t believe that Derrick Lewis was out of the fight.

Nevertheless, the fight was called and it’s another TKO loss. So, what does the UFC do with Derrick Lewis now that he’s lost another fight? Well, even Dana White said this loss really doesn’t hurt Lewis too much.

Some have suggested running back the Pavlovich fight and honestly, it’s not a horrible idea. I could see the UFC doing that, but there’s another fight to watch out for. That’s a fight with “Bigi Boy” Jairzinho Rozenstruik.

Rozenstruik would strike with Lewis and he’s in a very similar spot. Both men are now 1-3 in their last four fights with losing two straight. To me, it’s the perfect time for the UFC to make this one happen.