What’s next for Arman Tsarukyan after falling short at UFC Vegas 57? 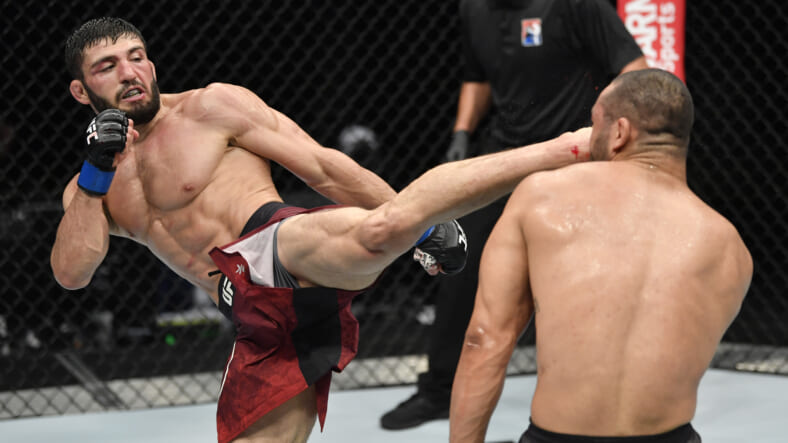 This past Saturday in the main event of UFC Vegas 57, we saw two of the best lightweights in the world battle it out. 11th ranked Arman Tsarukyan (18-3) took on 12th ranked Mateusz Gamrot (21-1) as both men looked to break into the top ten.

While not the most high profiled names, anyone who knows the sport was pumped for this main event at UFC Vegas 57. From the opening bell, you could tell why this was a matchup that fans were excited about.

Gamrot and Tsarukyan are both excellent grapplers so you figured this would be a battle on the feet. That’s exactly what we saw for the first couple of rounds at UFC Vegas 57. Neither man could land takedowns so they were striking it out.

Tsarukyan was getting the better of things with his blistering kicks. Through two rounds, I had Tsarukyan up 2-0. However, in the third round, Gamrot started to have success with his hands and started to land a few takedowns.

He didn’t get a ton of control in the third, but he got Tsarukyan down. Throughout the final couple of rounds, it was even, but Tsarukyan kept getting taken down. In the end, all three judges scored the UFC Vegas 57 for Gamrot after he won the final three rounds.

What’s next after UFC Vegas 57?

This was a tremendous effort for Tsarukyan at UFC Vegas 57. However, his inexperience in five-round fights really came back to bite him here. He looked sensational in the first two rounds, but really lost the battle of the gas tanks near the end.

While he was still firing big shots, he couldn’t stop Gamrot from taking him down. Now, he must go back to the drawing board after seeing his five-fight winning streak get snapped at UFC Vegas 57.

I will say, I don’t think he loses hardly any ground at all with this loss. It was a very close fight against the man ranked right next to him. So with that being said, what’s next for Arman Tsarukyan?

Well, this upcoming Saturday at UFC 276, Brad Riddell takes on Jalin Turner. I like the idea of pairing Tsarukyan with the winner especially if that winner is Brad Riddell. Would make sense from a rankings perspective and would make for a helluva fight.