What’s next for Anthony Smith after his injury at UFC 277? 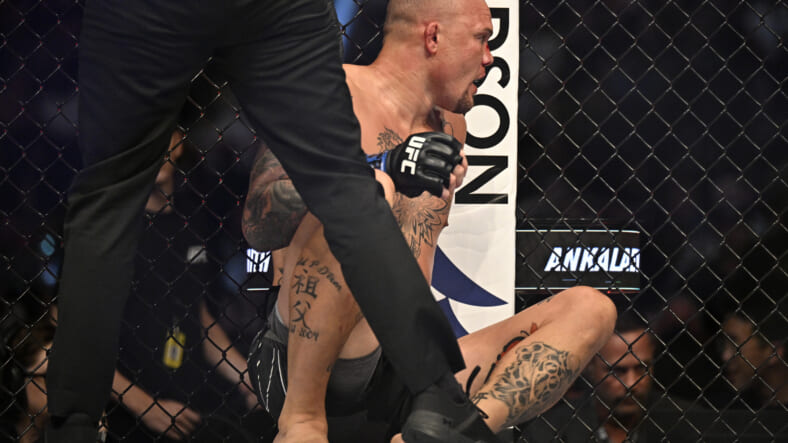 This past Saturday on the main card of UFC 277, we saw a pivotal matchup in the light heavyweight division. Former title challenger, Anthony “Lionheart” Smith (36-17) was taking on the surging Magomed Ankalaev (18-1).

However, three straight first round finishes earned him this shot with Ankalaev. I was really looking forward to seeing how Ankalaev would deal with someone like Lionheart. Unfortunately, we didn’t get to really see him tested.

In the first round at UFC 277, it became apparent that Smith hurt his ankle. He wasn’t throwing much and he looked considerably wobbly on his ankle. When he went back to his corner, he immediately asked for ice.

In the second round, he didn’t look steady at all as he desperately tried for takedowns. Ankalaev was able to get on top and started raining down punches. Smith turtled up and the fight was called off.

Smith immediately turned to the broadcast table and said his ankle was broken. Upon being reviewed in an X-Ray, it was discovered that his ankle was in fact broken and it will require surgery to repair.

Needless to say, it’s going to be a minute before Lionheart is ready for his UFC return. That being said, it doesn’t stop us from looking at potential matchups for him. There’s one in particular that I really want to see.

I would love to see a matchup between Smith and Paul Craig. These two had some verbal back-and-forth and for a while, I thought the UFC would book this fight. However, they obviously went in a different direction.

After this result and a loss in Craig’s last fight, I think it’s a perfect time to pair them up.