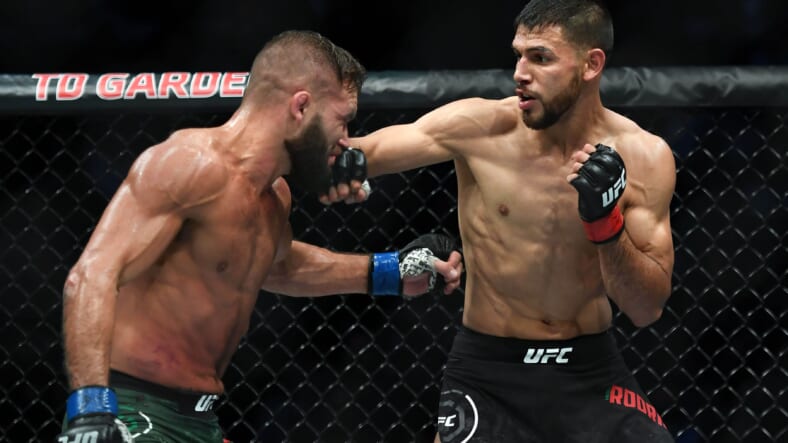 The world is going to have to wait a little longer for Yair Rodriguez‘s UFC return. Earlier this afternoon, ESPN reported that the top five featherweight has been suspended for six months by USADA and will not be eligible to compete until March.

However, the suspension is an interesting one. Rodriguez was not suspended for failing a drug test. Instead, the top UFC featherweight was suspended for not updating his location inside the USADA tracker for random testing.

Rodriguez did this three times in the span of 12 months which triggered the suspension. Over the weekend, Dana White gave some interesting answers regarding Yair Rodriguez. He stated in the post-fight press conference that Rodriguez wouldn’t be fighting anytime soon.

However, he didn’t announce why Rodriguez wouldn’t be fighting. A few days later and we have our answer. This is truly a headscratcher and in my opinion a very stupid reason to be suspended. However, it’s on Rodriguez for not following simple instructions.

It’ll be interesting to see what the promotion does with Rodriguez once he returns in March. Rodriguez was originally supposed to take on Zabit Magomedsharipov back in August in a UFC title eliminator.

Whoever won that fight was going to be in prime position to take on Alexander Volkanovski. Of course, Rodriguez went on to break his ankle and the fight was cancelled. The UFC has tried several times to make that fight, but it’s fallen through each time.

If the promotion still hasn’t found Zabit a fight by the time March rolls around, the UFC should still try to book that matchup. However, if Zabit has been booked, another fight for Rodriguez could be the loser of Max Holloway/Calvin Kattar or a rematch with Chan Sung Jung.