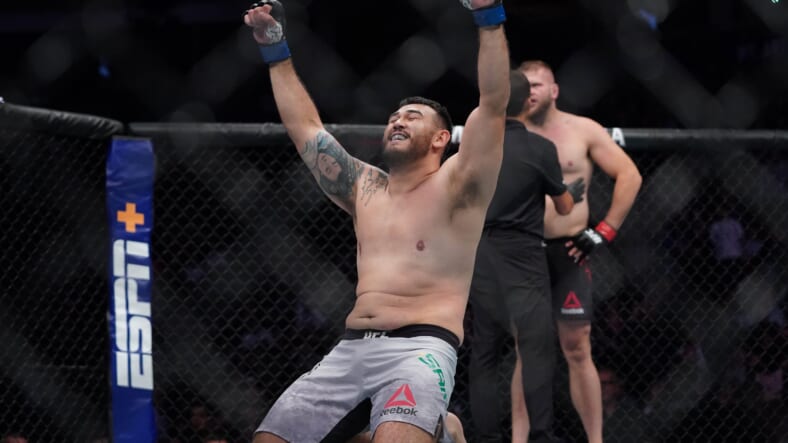 Tomorrow night on the main card of UFC Vegas 59, we are going to see a heavyweight battle with a ranking on the line. Fourteenth ranked Augusto Sakai (15-4-1) will look to hold onto their ranking as he takes on Sergey Spivak (14-3).

Augusto Sakai earned himself a UFC contract on Dana White’s Contender Series back in 2018. After earning himself a contract, he would go on to win four straight to start his career inside the octagon.

Then he got a main event shot against Alistair Overeem. After a strong start, he faded and was stopped in the fifth round. Starting with that fight, he’s lost three in a row so he needs a win in the worst way tomorrow night.

While Sakai has been sliding, Spivak has been surging. After losing his UFC debut, Sergei Spivak has been incredibly solid inside the octagon. He’s currently 5-2 in his last seven with wins over Tai Tuivasa, Aleksei Oleinik, and Greg Hardy. He’s looking for his second straight win and a UFC ranking tomorrow night.

In terms of the fight tomorrow night, a lot is going to come down to where the fight takes place. Augusto Sakai needs to do everything in his power to keep the fight standing at UFC Vegas 59. In fact, that’s pretty much his only chance.

We’ve seen him get into trouble when guys can take him down and that’s going to be in the game plan for Spivak. From the opening bell, expect Spivak to try to engage in the grappling. Look for him to press Sakai up against the fence and try to land takedowns.

Sakai needs a win in the worst way, but this is a bad matchup. I think Spivak will get his takedowns tomorrow night and I think he’ll ultimately win a decision because of it.