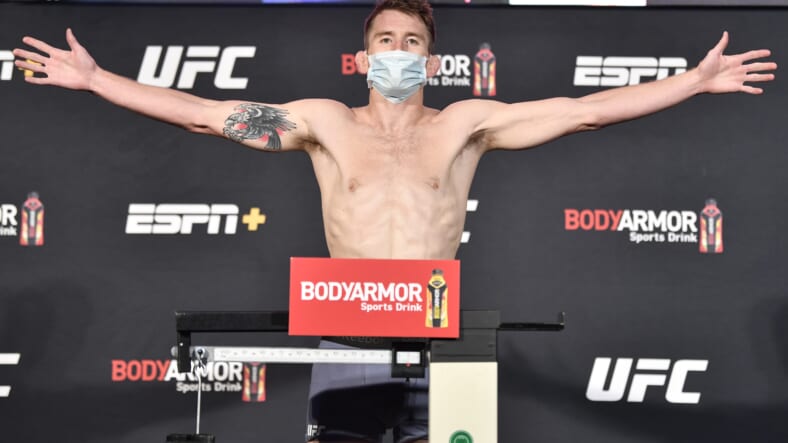 Tomorrow night in the main event of UFC Vegas 32, we will see one of the most highly anticipated main events of the year. Former bantamweight champion TJ Dillashaw (16-4) is returning after a two-year suspension and is taking on top contender Cory Sandhagen (14-2).

Just a few years ago, TJ Dillashaw was on top of the world. He was the undisputed UFC bantamweight champion with aspirations of becoming a two-division champion. Dillashaw decided to drop to 125 pounds to challenge Henry Cejudo for the flyweight title to realize his dream.

However, to assist with dropping weight and not losing energy, Dillashaw took EPO. EPO is a strong performance enhancer and the UFC informed him of the positive test after he lost to Cejudo in January of 2019. Dillashaw was then suspended for two years.

Obviously, Dillashaw relinquished the title, but it’s worth noting that he never truly lost that belt in the octagon. That’s why he wanted to go right back to the top upon his return and it doesn’t get much better than The Sandman, Cory Sandhagen.

Since making his debut with the UFC, Sandhagen has gone an impressive 7-1. The lone loss came against the current champion Aljamain Sterling. However, since that loss he’s bounced back with back-to-back knockouts over Marlon Moraes and Frankie Edgar.

The two men in the main event of UFC Vegas 32 are very familiar with each other. In fact, the two men used to train together and Dillashaw has sang the praises of Cory Sandhagen in the past. However, tomorrow night is all business.

It’s worth noting that at bantamweight in the UFC, Dillashaw has been close to perfect. After losing in the finale of The Ultimate Fighter, Dillashaw has gone 12-2 in the division. The two losses were razor close split decisions and most believe he definitely won the Assuncao fight.

However, there are a ton of questions surrounding Dillashaw. Two years of his prime are gone and now he’s coming back to take on the best that the UFC has to offer. Sandhagen really looks like he’s coming into his own and doesn’t look like he’s going to be an easy challenge.

I think we are going to see a razor close fight tomorrow night. I’m expecting to see a very good version of TJ Dillashaw, but I’m not convinced he gets it done here. I think we might be getting ready to enter the time of The Sandman.