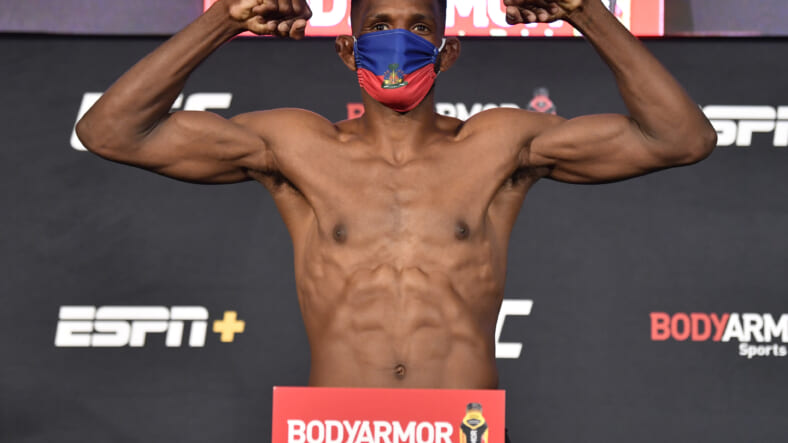 Probably the one fight that has the most hype at UFC Vegas 26, is the welterweight showdown between Neil Magny (24-8) and Geoff Neal (13-3). These two top ten welterweights will finally cross paths tomorrow night on the main card.

Originally, these two were supposed to fight last year. However, Neal had to pull out of the fight. Because of some health issues, Geoff Neal only competed once in the octagon during 2020.

His one fight came in December against Stephen “Wonderboy” Thompson. Thompson outstruck Geoff Neal and won a decision. It was the first loss in the UFC for Handz of Steel.

After earning a contract on Dana White’s Contender Series, Neal started out a perfect 5-0 in the UFC. He holds victories over Mike Perry, Niko Price, and Belal Muhammad. A win over Neil Magny would be huge in getting Neal back on track towards the top of the division.

The Haitian Sensation main evented a Fight Night back in January against Michael Chiesa. Had Magny won that fight, he might’ve been looking at a UFC title eliminator next. However, Magny was shutout by Chiesa and now he’s looking to bounce back as well.

This UFC Vegas 26 matchup is a big fight for both men. Both are right inside the top ten and both are coming off of a loss. A win for either man would put them back on track and might get them someone near the top five in their next fight.

When it comes to this matchup, it all comes down to which Neil Magny we get. If Neil Magny is the one pushing the pace and he can mix in his wrestling, he has an excellent chance of winning tomorrow night.

However, if Magny is backing up and letting Geoff Neal lead the dance, he’s going to be in trouble. Both men could win tomorrow at UFC Vegas 26, but I think this matchup really favors Geoff Neal.

I think you’re going to see Neal fight like he really has something to prove tomorrow night. I’m expecting a lot of forward pressure and don’t be surprised if you see a big shot land that drops Magny. Magny is durable, but I see him getting hurt tomorrow.

Prediction: Geoff Neal by TKO – Round 2