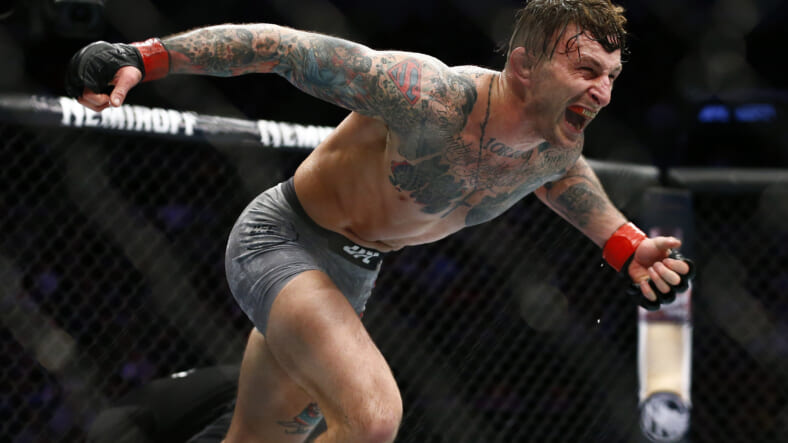 Tomorrow night on the main card of UFC Vegas 26, we will see a lightweight showdown between two top 15 contenders. Diego Ferreira (17-3) will look to bounce back as he takes on ‘The Gift’ Gregor Gillespie (13-1).

The UFC announced that Ferreira would be giving up 30% of his purse and the fight goes on. The last time we saw Ferreira was in February when he took on Beneil Dariush. It was the second time the two men had faced off in the UFC and Dariush won both times.

That loss for Ferreira snapped a six-fight win streak. Prior to that, Ferreira had defeated former UFC lightweight champion Anthony Pettis in early 2020. The only two men to defeat Ferreira in his career is Dariush and top contender Dustin Poirier.

Gregor Gillespie is looking to join that list tomorrow night. This is the first time that we are seeing Gillespie in the UFC since his knockout loss to Kevin Lee that took place at UFC 244 in 2019.

Prior to that loss, Gillespie had dominated every opponent he faced inside the octagon. Gillespie is one of the best pure wrestlers in the lightweight division and he’s going to try and use that tomorrow night.

The missed weight for Diego Ferreira adds in a new aspect to this matchup at UFC Vegas 26. You had to know going into this fight that Gillespie is going to look to push the pace early and engage in the grappling.

That’s what Beneil Dariush did and it worked well against Ferreira. I believe that Gillespie has improved striking, but there’s no questioning as to where he wants this fight to take place. Now, Ferreira does have very good submissions as seven of his career wins have come via submission.

However, I’m not sure how he’ll do if he’s on the bottom against someone like Gillespie. The hard weight cut and the pressure from Gillespie might be too much at UFC Vegas 26. If Ferreira wins tomorrow, I think it’s because he pulls off a submission from his back.

I think Gregor Gillespie is going to get this fight to the mat. His wrestling and strength is just too good and I expect him to land takedowns. How Ferreira responds will be the key. He almost locked up Dariush a few times, and he can catch Gillespie if he’s sloppy. However, I don’t see it happening.