UFC: Trouble at the top; McGregor, Jones, and Masvidal frustrated with the UFC 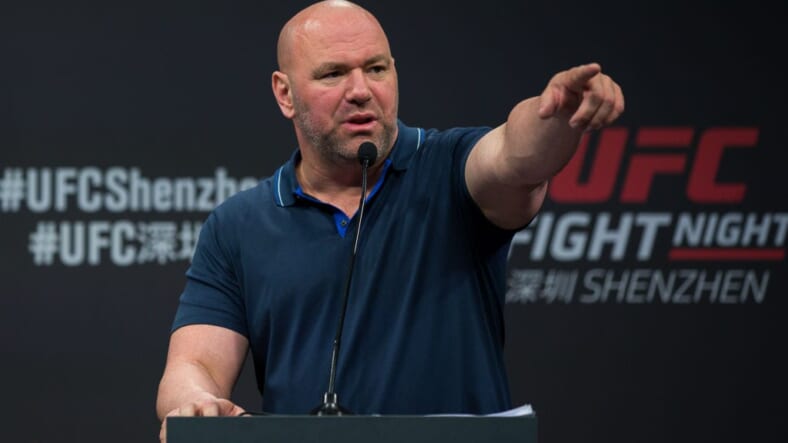 UFC President Dana White seems to have a problem on his hands. Three of the top stars in the UFC have all come out in the last week expressing their frustrations with the company. Everything started with the failed Jon Jones/Francis Ngannou negotiations. Then it spilled into the Jorge Masvidal/Kamaru Usman negotiations. Then out of no where on Saturday night, Conor McGregor announces he’s leaving the sport because of where things stand with him. The world is going through a pandemic which has already created a lot of issues for the UFC, but the UFC’s biggest problems start at the top.

Back in early May, the UFC was riding high after being the first major sport to return to action. UFC 249 was a huge success, and so many fighters were chomping at the bit to get back into the octagon. One of those fighters was UFC light heavyweight champion, Jon Jones. Jones has flirted with the idea of moving to heavyweight for the last couple of years, and after Francis Ngannou’s performance at UFC 249, “Bones” was ready to take on the challenge.

The two men exchanged some public jabs through Twitter, and stated that they wanted to fight each other if the money was right. Jones said that he wanted to be paid more to make the jump up in weight to take on the heavyweight knockout artist. Conventional wisdom was that Jones would probably get a pay bump, but then Jones took to Twitter to voice his frustrations.

It’s interesting to just sit here and watch your boss lie to the camera like this. We never discussed any increase in pay. Immediately the conversation was that I already made enough. I never made a number offer. https://t.co/YYx4FMHeIs

This was just the beginning of this saga. There was some public back and forth between White and Jones before Jones came out and asked to be released. Jones went on to announce on Twitter that he would vacate his light heavyweight title. Jones is widely considered the greatest mixed martial artist of all time, and he’s one of the biggest names in the sport. White acknowledged the fact that Jones was a partner in the business, and stated that they would figure things out eventually. Jones took to Twitter as recently as yesterday to voice his frustrations stating: “Everything was good until I asked for a piece of the pie…”.

By all accounts, the UFC was fully planning on having Jorge Masvidal fight Kamaru Usman for the welterweight title on July 11th. Masvidal had an incredible 2019, and the two men have had verbal altercations which has put a lot of steam behind the fight. Despite not bringing in money from live gates, it appeared that the fight would get done. However, everything changed when Masvidal took to Twitter to voice his frustrations.

If I’m not worth it let me go @espn

Following the Jones situation, it appeared that we had a second failed negotiation with the UFC. Since this tweet, there has been a lot of public remarks made by “Gambred” regarding the revenue split between the fighters and the UFC. The July 11th negotiations are pretty much dead, and Masivdal is wanting answers from the UFC. After defeating Tyron Woodley, Gilbert Burns is likely going to get the title shot over Masvidal due to the fact that he’s willing to accept the smaller purse to make the fight happen. Masvidal is now in this incredibly frustrating position where he doesn’t have an opponent, and he doesn’t have any prospects. White said that Masvidal just signed a new seven fight deal months ago which gives the UFC way more leverage in these negotiations, but it’s still frustrating for the welterweight.

Conor McGregor Walks Away. . . For now

UFC 250 was another huge success for the company. The fights were incredible and the PPV numbers were trending very well. Five minutes hadn’t gone by after the Amanda Nunes fight had ended before Twitter became the platform again for a big statement. This one coming from the biggest star the sport has ever seen.

Hey guys I’ve decided to retire from fighting.
Thank you all for the amazing memories! What a ride it’s been!
Here is a picture of myself and my mother in Las Vegas post one of my World title wins!
Pick the home of your dreams Mags I love you!
Whatever you desire it’s yours ?? pic.twitter.com/Dh4ijsZacZ

Conor McGregor shocked everyone by announcing his retirement from fighting right after the event had concluded. McGregor has been very active on social media lately showing off his training and calling out multiple fighters. McGregor has told White that he wanted to fight as soon as he could. White said last week that he would recommend that McGregor wait until Khabib Nurmagomedov and Justin Gaethje fight in September. This obviously was incredibly frustrating for the Irishman to hear.

McGregor stated at the beginning of 2020 that he wanted to be very active this year. He wanted multiple fights, and he wanted to regain his lightweight title. If McGregor had followed the advice of White, he would likely not fight again until December, if not 2021. That would be another year-long layoff for McGregor. He stated in an interview with ESPN’s Ariel Helwani that we wanted to fight Gaethje for the interim title in July.

The UFC was not willing to make that happen, and they did not offer McGregor another opponent. As a result, the superstar was left just sitting there. Frustrated by the entire thing, McGregor took to Twitter to announce his retirement. To me, this sounds a lot like the UFC is not too eager to make a Conor McGregor fight with no fans in the stands. It would be a massive PPV, but they’d be missing out on a $10+ million gate. In my opinion, that is playing a massive role in the UFC’s hesitancy to give him a fight. Now, I don’t believe that McGregor is actually retired, but I do believe that there are major problems between the UFC and their top draws.

Where does the UFC go from here?

The UFC needs to get a handle on this situation. It is one thing for one fighter to publicly come out with an issue, it’s another ballgame when three of your biggest stars are asking to either be released or retiring altogether. The UFC still does not have a main event for their big July 11th card. If it was me, I would try to work things out with Masvidal to get the original fight booked. If I couldn’t make that happen, I’d try to get McGregor to headline the card. Missing out on a live gate is not worth losing Conor McGregor for good. The UFC needs to sit down with these guys and figure out the best path forward for everyone. As White stated, these guys are partners with the company when they become stars. The situation is tense right now, but I think eventually we will see cooler heads prevail. As a fan, I’m hoping that we get to see all three men fight again at some point in 2020. You have to believe the UFC would like that as well.