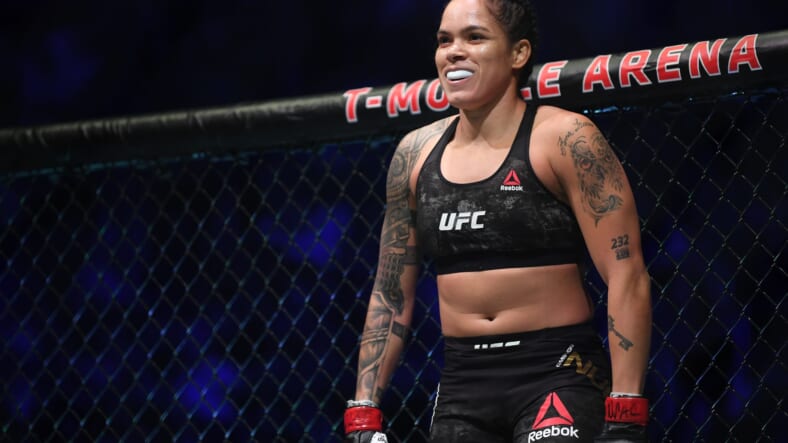 As we get ready to enter 2021, the UFC‘s bantamweight and featherweight divisions are still controlled by the GOAT, Amanda Nunes (20-4). Nunes has held both titles since December of 2018 when she knocked out Cris Cyborg at UFC 232.

Since making her UFC debut back in 2013, Nunes has gone 13-1 with her lone loss coming to Cat Zingano. That fight occurred when Nunes will still coming into her own inside the octagon.

After that loss, she’s hardly looked human. Only Valentina Shevchenko and Germaine de Randamie have even been competitive. Every one else has been destroyed by Nunes inside a UFC octagon.

In 2020, we only saw the two-division champion once. She defended her featherweight title against Felicia Spencer back at UFC 250. It was one of the more one-sided title fights you will ever see in the UFC.

Nunes was scheduled to face Megan Anderson (11-4) at UFC 256, but she had to pull out of the fight. The fight has been rescheduled and Megan Anderson will get her shot at the two-division champion at UFC 259.

Nunes has said that she plans on being very active in 2021. She wants to defend both of her titles and her current plan is to fight at bantamweight after this first title defense against Megan Anderson at featherweight.

After Anderson, it’s not clear on what’s next for Nunes at featherweight. The UFC has been trying to acquire talent for that division, however, they still don’t have enough to even fill out the rankings.

Bantamweight is a different story. The clear number one contender in the division is de Randamie. Germaine de Randamie made her UFC debut back in 2013 and she has only been defeated twice in the octagon.

Both of those losses came to Amanda Nunes. Last December, the two fought at UFC 245. Nunes clearly won the fight, but de Randamie showed that she has the ability to stand up with the champion. De Randamie just fought and put Julianna Pena to sleep with a choke in October.

A fight that I could see the UFC doing is the rematch between de Randamie and Holly Holm. Holm is the former bantamweight champion and she’s won two straight. Her last performance against Irene Aldana was sensational.

Holm and de Randamie fought for the featherweight title back in 2017 with de Randamie edging that one out. I could see the UFC putting those two together in a title eliminator while Nunes defends at featherweight.

While these divisions won’t see a lot of fresh faces and new contenders, it’s still going to be fun watching Nunes continue her UFC reign in 2021. Maybe someone can pull off a miracle and dethrone her. Time will tell on that one.