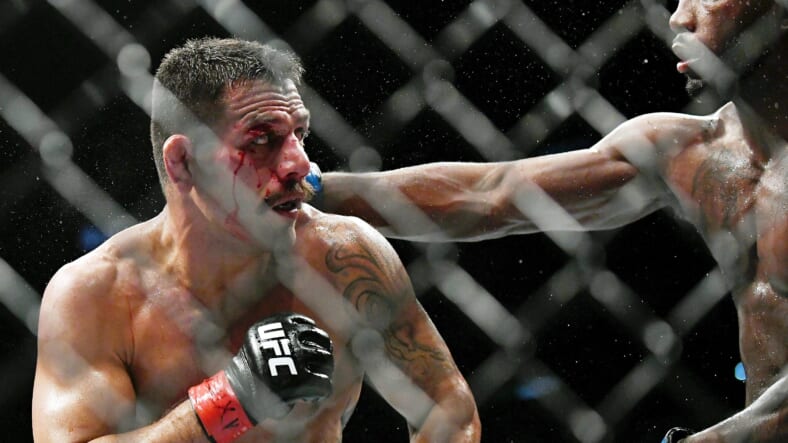 The year is 2016 and Rafael Dos Anjos (30-13) is the UFC‘s lightweight champion. RDA was 10-1 in his last eleven fights on his way to capturing the lightweight title. He was looked at as one of the very best in the sport.

Dos Anjos was set to headline UFC 196 against the featherweight champion, Conor McGregor (22-5). McGregor had just knocked out Jose Aldo in 14 seconds to become the undisputed champion. He immediately wanted to move up in weight to become a two-division champion.

The UFC booked the fight and the superfight was set. However, the superfight never came to be. As the story goes, RDA ended up injured and some guy named Nate Diaz (20-12) took his place. Diaz went on to defeat Conor McGregor and the two rematched in August.

With those two tied up, RDA recovered and ended up fighting Eddie Alvarez for the lightweight title. Alvarez stopped Dos Anjos and became the UFC lightweight champion. McGregor then knocked out Alvarez to win the title. RDA would go on to lose a second straight fight before moving up to welterweight for the last few years.

Now, RDA has returned to the UFC‘s lightweight division. It’s been a few years, but he still wants that fight with Conor McGregor. McGregor is fresh off of a loss at UFC 257 to Dustin Poirier (27-6, 1 NC). McGregor is ranked sixth while RDA is ranked seventh in the division. Could this fight finally happen?

Dos Anjos had an interview with MMA Junkie this week where he talked about the potential matchup. It’s a fight that RDA would like the UFC to put together and he still believes that he is a nightmare matchup for Conor McGregor.

“I’m a very bad matchup for Conor,” RDA told MMA Junkie. “My style, my kicks, southpaw stance, my wrestling, and my grappling. This has passed, but with the results of his last fight, I believe our paths can cross again.”

McGregor has come out and said that he wants the trilogy with Poirier next. The UFC is still going back and forth about what they want to do. If McGregor wants to get back in there for the sake of competition, RDA would be a good opponent for him.

Obviously, there’s history between the two men. This is a fight that we never got to see as fight fans and it’s a very intriguing matchup on paper. From a rankings perspective, it’s actually the one fight for McGregor that makes the most sense. Will be interesting to see how the UFC proceeds.