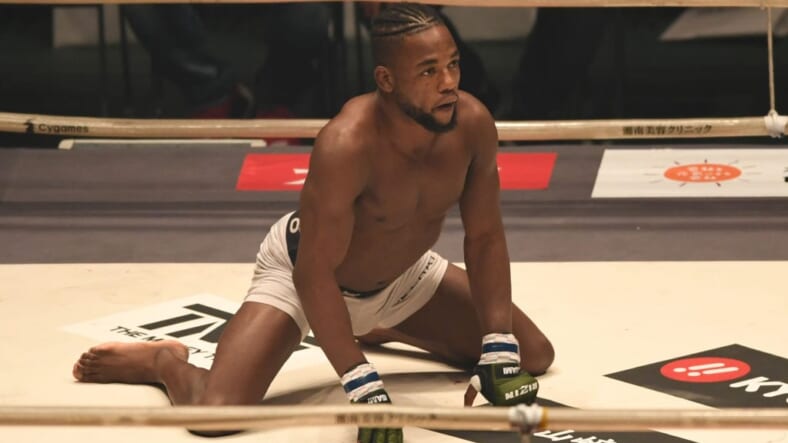 SAITAMA, JAPAN - DECEMBER 31: Manel Kape enters the ring prior to the bout between Ulka Sasaki of Japan and Manel Kape of Angola during the RIZIN. 14 at Saitama Super Arena on December 31, 2018 in Saitama, Japan. (Photo by Etsuo Hara/Getty Images)

Next weekend’s UFC Vegas 17 card is one of the more stacked fight night cards in recent memory. However, the card has taken some hits. Earlier this week, a positive COVID test from Leon Edwards scratched the main event against Khamzat Chimaev.

That fight is looking like it will be rebooked in January or February. Now, today we found out that UFC Vegas 17 is losing another fight. MMA Fighting was first to report that the flyweight contest between Manel Kape (15-4) and Alexandre Pantoja (22-5) has been called off.

Pantoja reportedly had to pull out of the fight for undisclosed reasons. While this wasn’t the biggest fight on the card, this was a fight that die-hard MMA fans were really looking forward to.

Manel Kape is one of the best flyweights in the world. This fight was going to be his UFC debut and he was getting a very exciting opponent in Alexandre Pantoja. The perfect introduction for Kape into the UFC.

Whenever Kape does make his UFC debut, he will do it on the heels of three consecutive knockout finishes. Those finishes led him to being crowned champion over in Rizin. Kape is expected to be an immediate title contender at 125 pounds.

Again, at this time there is no reason as to why Pantoja had to pull out of UFC Vegas 17. That being said, the promotion is tossing around dates in February for the fight to be rebooked per MMA Fighting.

When these two do meet in the octagon, Pantoja will be looking to bounce back after a loss to Askar Askarov that came back in July. Since May of 2018, Askarov and current UFC flyweight champion, Deiveson Figueiredo, are the only two to beat Pantoja.

Pantoja even has a win over current number one contender, Brandon Moreno. I’m really happy to hear that the promotion is sticking with this fight instead of moving to something else. This should be a fantastic matchup whenever it does get finalized.