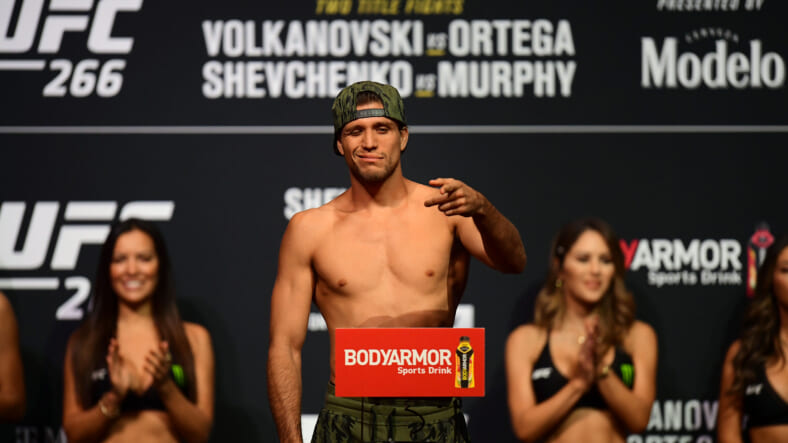 Tomorrow in the main event of UFC Long Island we are going to see a pivotal matchup in the featherweight division. Former two-time title challenger Brian “T-City” Ortega (15-2, 1 NC) is back as he takes on “El Pantera” Yair Rodriguez (13-3, 1 NC).

However, he wasn’t able to pull it off and he fell short. Ortega is 1-2 in his last three and those two losses came to the champion and Max Holloway. Speaking of Max Holloway, that’s who Yair Rodriguez last fought.

Rodriguez and Holloway headlined a UFC Fight Night back in November. It was a very competitive fight with Holloway pulling away just enough to win a decision. However, Yair Rodriguez showed how dangerous he was in that matchup.

On paper, this main event appears to be the classic striker versus grappler matchup. Ortega is a submission specialist while Yair Rodriguez is an incredibly dynamic and entertaining striker.

However, we’ve seen much improved striking from Brian Ortega. That being said, has he improved enough to win this fight at UFC Long Island. If this fight stays at range, Ortega is going to be in trouble. Rodriguez lives at range with his fast and long combinations combined with his lethal kicks.

Ortega needs to get this fight in tight and if at all possible, he needs it to hit the ground. These two are miles apart in terms of their skills on the ground. If this fight touches the mat, it could end quickly for Rodriguez.

I’ve gone back-and-forth with my prediction on this one. However, I think I’m going to go with Ortega at UFC Long Island. I’m expecting Rodriguez to get the better of the striking, but I’m betting on this fight ending in a grappling exchange in the middle rounds.

There will be some scrambles and in those scrambles, Ortega is going to get Rodriguez’s next. Once he gets it, he’s taking it and the victory.