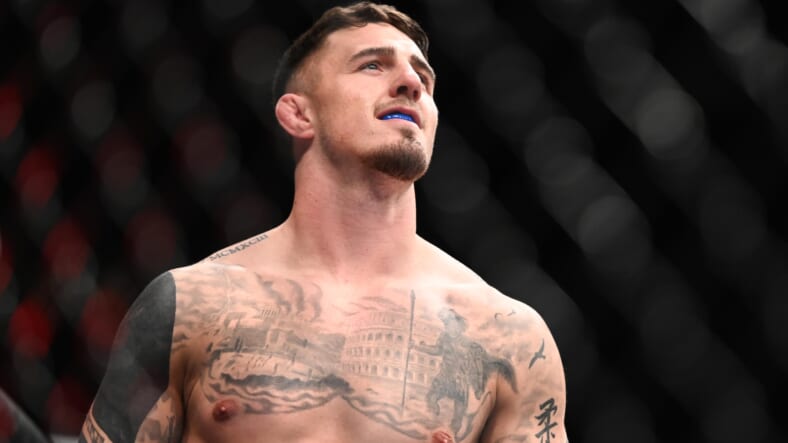 Tomorrow in the main event of UFC London, we are going to see a massive fight in the heavyweight division. England’s own Tom Aspinall (12-2) will be headlining his second straight London card as he takes on Curtis “Razor” Blaydes (16-3, 1 NC).

For Aspinall, he carries in an eight-fight winning streak into the UFC London headliner. That includes his win against Alexander Volkov in the first London headliner earlier this year in March.

Since joining the UFC, Aspinall is 5-0 and only one opponent has made it out of the first round. That opponent only made it 69 seconds into the second round. However, this will be the toughest test of his professional career tomorrow night.

Curtis Blaydes has only lost three times and twice was to UFC heavyweight champion Francis Ngannou. The other loss was a knockout loss to the heavyweight knockout king Derrick Lewis. Outside of that, he’s got wins over Overeem, Volkov, Dos Santos, and Rozenstruik.

The last time we saw him was at UFC Columbus where he took on Chris Daukaus. Blaydes put on a sensational performance and knocked out Daukaus in the second round. It was the best he’s looked in a long time.

Tom Aspinall just might be the most well-rounded heavyweight in the UFC. He’s got sensational Jiu Jitsu and he regularly trains his boxing with Tyson Fury. His hands are incredible and he has tremendous speed for a heavyweight.

That being said, he has a very unique challenge in Curtis Blaydes. Blaydes has some of the most power in the division and he’s a tremendous wrestler. We’ve really never seen the takedown defense tested of Aspinall since he’s been in the UFC.

Blaydes is going to test him. He’s going to see just how strong Aspinall is in those grappling exchanges. I think we will actually see Blaydes get the better of things in the first round or two as he uses his grappling and strength.

However, I’m playing the long game in my UFC London prediction. I think by the middle rounds, Blaydes is going to start getting tired. When he does, I think the precise boxing combinations of Aspinall are going to add up.

While I wouldn’t be shocked at all to see a Blaydes win, I like Tom Aspinall to get a finish in the main event rounds. Round 4 will see Aspinall really start to tee off to the point where he gets his sixth straight finish in the UFC.

Prediction: Tom Aspinall by TKO – Round 4