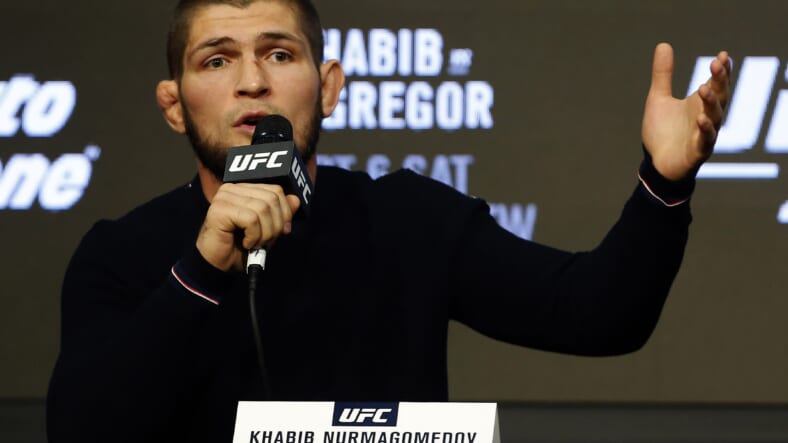 This weekend at UFC 254, Khabib Nurmagomedov (28-0) will be taking on Justin Gaethje (22-2) for the undisputed lightweight championship. The Eagle is looking to continue his dominance at lightweight. Gaethje is looking to pull of the biggest year of his career.

Even with his full focus on this weekend, the UFC champion couldn’t get away from questions regarding his rival Conor McGregor. McGregor has agreed to fight Dustin Poirier on January 23rd. The fight is done with just contracts needing to be signed per Dana White.Â

There is the general feel that the winner of the McGregor – Poirier fight would get the next crack at the UFC lightweight championship. However, there hasn’t been a weight that has been agreed to for the potential January fight.

McGregor’s head coach hinted that the fight would take place at welterweight. That didn’t sit well with the current UFC champion. Nurmagomedov came out this week and said that the fight between the two needs to happen at lightweight.

It’s worth noting that outside of the fight against Nurmagomedov, all three of McGregor’s last three UFC contest have taken place at welterweight. Even though the fighters he’s fought were both natural lightweights.

I can see where Nurmagomedov is coming. If they want a UFC title shot, they should have to fight at the weight class that they will have to fight in to win the title. However, I can also see the point from the other camps.

If McGregor pushes for 170, it goes back to the point that both fighters wouldn’t have to cut weight. Neither would deplete themselves so the UFC would get both guys at their very best. The weight cut isn’t easy for McGregor or Poirier.

Considering the trend, my guess is that the UFC does try to book McGregor – Poirier at lightweight. I know McGregor’s last few fights have been at 170, but I think the promotion will try to push to get him back at his natural weight which is at lightweight.