UFC: Joanna Jedrzejczyk says either herself or Zhang Weili should be next for Namajunas 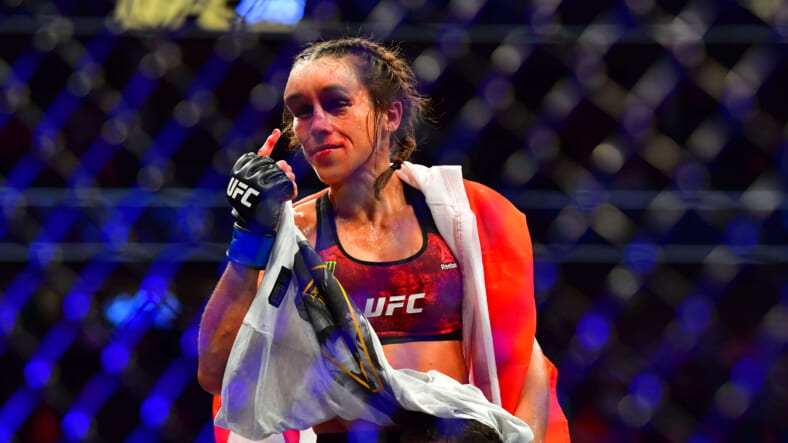 Former UFC strawweight champion Joanna Jedrzejczyk (16-4) is working hard to prepare for her octagon return. The former champion hasn’t fought since March of 2020 when she lost a split decision to Zhang Weili (21-2).

The two women had a war at UFC 248 and Jedrzejczyk came up just short in her attempt to regain the strawweight title. After dominating the 115 pound division and defending her title five times, Jedrzejczyk is now 0-4 in her last four title fights.

That said, Jedrzejczyk has still only lost in title fights in her entire career. She’s lost twice to the current strawweight champion Rose Namajunas (10-4), she lost to Valentina Shevchenko at flyweight, and she lost to Weili.

The only three women to defeat her in her career are at the very top of the sport. Jedrzejczyk has been very vocal that she wanted another UFC title shot upon her return to the octagon. The former champion wants to get a third crack at Rose Namajunas.

However, it’s not the easiest of sells when she’s just 2-4 in her last six fights. That said, you can easily say that Jedrzejczyk is still one of the very best fighters in the UFC.

On paper, it appears that Carla Esparza (18-6) should get the next UFC title shot. She’s won five fights in a row and she holds a victory over Namajunas. However, Jedrzejczyk doesn’t believe that Esparza is deserving of the next shot at the champion.

Who should get the next UFC title shot?

In an interview with The Schmo this weekend, Jedrzejczyk said that she believes either herself or Zhang Weili should be next for Namajunas. While she acknowledged the winning streak of Esparza, she said she didn’t believe it was the right fight to make.

From a business perspective, the former UFC champion is correct. If you were to line up the three leading contenders, the least sexy fight is the rematch between Carla Esparza and Rose Namajunas.

Despite the fact that Esparza is the only one of the three to hold a victory over Namajunas, there’s significantly less interest from the fans. Ultimately, this is going to come down to what the UFC prioritizes.

I do not believe that Jedrzejczyk is getting the next shot at the title. However, I do believe she will fight the other contender who doesn’t get the shot. With that, the next shot will either go to Zhang Weili or Carla Esparza.

If I had to guess, I think the UFC would prefer to put Weili in that title fight. However, I think Namajunas is the type of champion who would want to give it to the deserving contender. It’ll be an interesting storyline to follow over the coming weeks.