Ahead of UFC 280, is Michael Chandler right about Islam Makhachev? 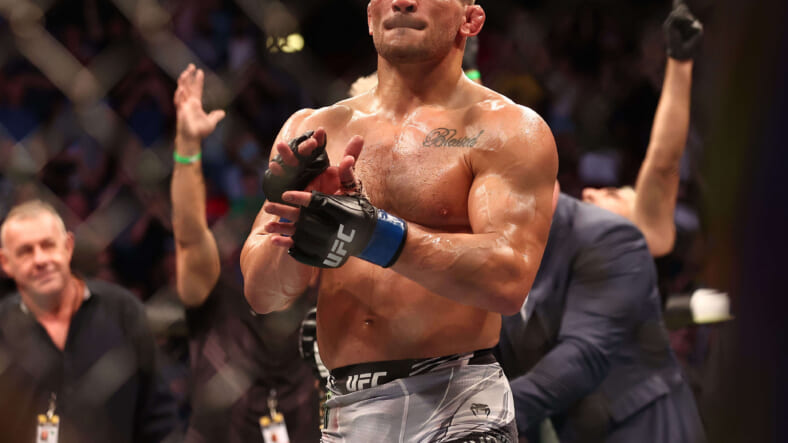 In just less than a month, UFC 280 will be going down in Abu Dhabi. In the main event, the vacant lightweight title is on the line as the former champion Charles Oliveira (33-8) looks to regain the title he never lost as he takes on the sensational Islam Makhachev (22-1).

Many people have said for a long time that Makhachev was the best lightweight in the division. Some have even called him the uncrowned champion. Makhachev will enter the octagon on October 22nd riding a ten-fight winning streak.

Grappling, striking, submissions, Islam Makhachev has it all. There’s clearly a reason why he’s so highly viewed in the MMA community. Hell, Charles Oliveira has won 11 straight and he has been the betting underdog in the majority of sports books.

One man who thinks everyone should pump the breaks is Michael Chandler. Chandler fought Charles Oliveira and came close to beating him for the lightweight title. However, Oliveira knocked him out in the second round.

Chandler came out this week and stated that all of the praise for Makhachev is a little premature. He pointed out the level of competition to MMA Fighting which drew a response from Makhachev. Makhachev told him via Twitter to, “Shut up and stay in line.”

Now, Makhachev does have some impressive wins. His win over Arman Tsarukyan continues to look better and better. He defeated Drew Dober, Thiago Moises, and Dan Hooker. That being said, only two of those guys are inside the UFC’s top fifteen at lightweight.

Oliveira has fought the best of the best and won. Islam Makhachev has not fought anyone elite at 155 pounds. Makhachev has a ton of skill, nobody is denying that. He very well might win the lightweight title at UFC 280.

However, should he be favored? Absolutely not. Charles Oliveira has better pure striking technique. He has better jiu jitsu and is just slicker on the ground. Does Makhachev have the strength advantage? Yes, and he also has a big advantage in terms of wrestling.

The fight is an excellent one, but if you’re betting this one, it’s hard to bet against the man who has an answer for all of Makhachev’s attacks and he’s faced MUCH steeper competition. Say whatever you want about Michael Chandler, but he does have a point. Until Islam Makhachev defeats someone like a Charles Oliveira, everyone should pump the breaks.