UFC: Francis Ngannou’s future in limbo as he targets 2023 return 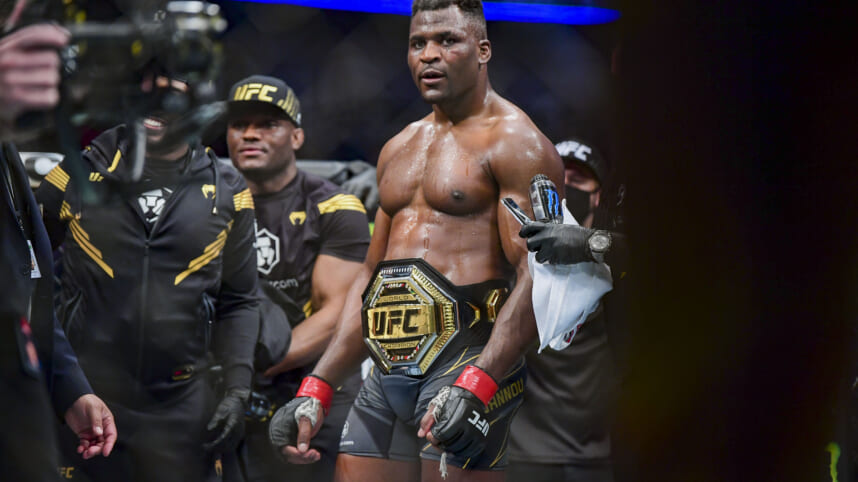 Tomorrow, the UFC heads to Paris for the first time with a big time heavyweight matchup in the main event. One man who will be in attendance tomorrow for the fights is heavyweight champion Francis Ngannou (17-3).

Ngannou is currently on the mend from knee surgery that took place after his title defense against Ciryl Gane back in January. Heading into that fight, there was a lot said by the champion in regards to his future with the promotion.

Ngannou hinted that his time with the UFC could be coming to an end if his demands weren’t met for a new contract. Well, when he won in January, his contract renewed for a year with the promotion’s championship clause.

The promotion had hoped that Ngannou would be ready for UFC 282 in December. That is what they are targeting for the return of Jon Jones. Jones would be either meeting Ngannou for the title or former champion Stipe Miocic for the interim title. While the hope was Ngannou, he put some water on that fire in an interview with ESPN.

Is Ngannou done with the UFC?

In speaking with ESPN, Ngannou stated that he would be going to Las Vegas next week to meet with his doctor. From there, he would start to get himself into a pre-training camp. The champion told ESPN that he’s very out of shape at the moment and he still doesn’t feel incredibly strong on that knee.

When asked about UFC 282, Ngannou said it’s unlikely that he’ll be ready by then. Instead, he’s targeting a return in early 2023. That is where things get interesting. As mentioned, Ngannou’s contract was renewed for 12 months when he defeated Ciryl Gane.

That means his contract will expire in January. Technically, Ngannou could walk away from the UFC to pursue high-paying opportunities in boxing. Perhaps a showdown with Tyson Fury which is something that Ngannou has been wanting for a long time.

Given the current timeline, I think that the UFC will go ahead and book Jones against Miocic. In their mind, the winner would take on Ngannou for the undisputed title in the first quarter of 2023. However, there’s no guarantee it happens with Ngannou having the option to walk away.