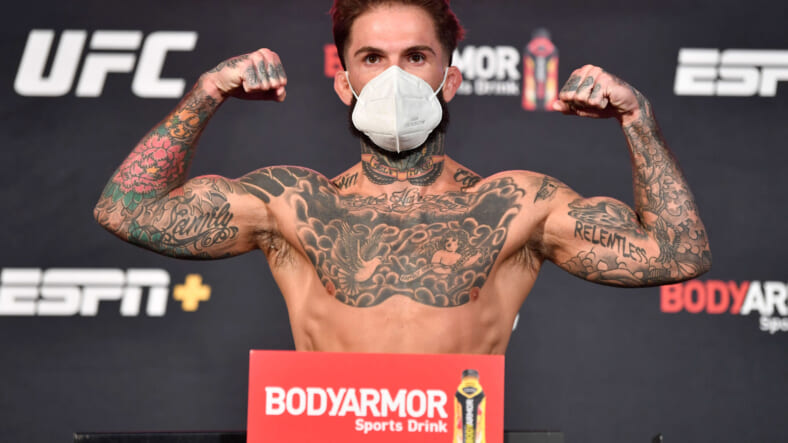 One of the best highlight reel knockouts of 2020 came back at UFC 250. That night, Cody Garbrandt (12-3) unleashed a vicious right hook in the final seconds of the first round to completely flatten Raphael Assuncao.

The former UFC bantamweight champion picked up his first win since December of 2016 with that knockout. Prior to that victory, he had been knocked out in three straight fights.

After Garbrandt won, he was moved up to third in the bantamweight rankings. However, he wanted to drop down to 125 pounds and fight at flyweight. He had his eyes set on the newly crowned flyweight champion, Deiveson Figueiredo (20-1-1).

The UFC booked their title fight for November. However, due to injuries and a battle with COVID, Garbrandt had to pull out of the fight. Garbrandt has been healing on the sidelines while awaiting his flyweight title opportunity.

The former bantamweight champion was all set to take on the winner of the UFC 256 headliner between Figueiredo and Brandon Moreno (18-5-2). However, the two men fought to a draw and the UFC is going to give Moreno an immediate rematch.

Garbrandt is ready for another fight, however, if he wants to wait for a flyweight title shot, he won’t fight until late in the summer. Instead, Garbrandt has his eyes on a big fight at bantamweight while he waits.

Will the UFC book Garbrandt – Aldo?

Cody Garbrandt told ESPN this week that the fight that he wants is Jose Aldo (29-7). He pointed out the fact that at this stage he only wants to fight big names if he’s not getting a title shot. His desire to remain active is why he’s wanting to fight again at bantamweight.

Aldo is coming off of a win in December over Chito Vera. The win snapped a three-fight losing streak for Aldo. Aldo has looked rejuvenated since dropping down to bantamweight in late 2019.

Currently, both men are ranked in the top six of the division. Aldo has been calling out TJ Dillashaw (16-4), however, there’s no traction on that fight at the moment. Garbrandt also told ESPN that he wants to fight a “clean” TJ Dillashaw.

No Love made it very clear that he still intends on dropping to 125 pounds when he’s presented with the title shot. The desire to fight Aldo just stems from remaining active and getting to fight a big name. Personally, I love the matchup if the UFC can get it done.