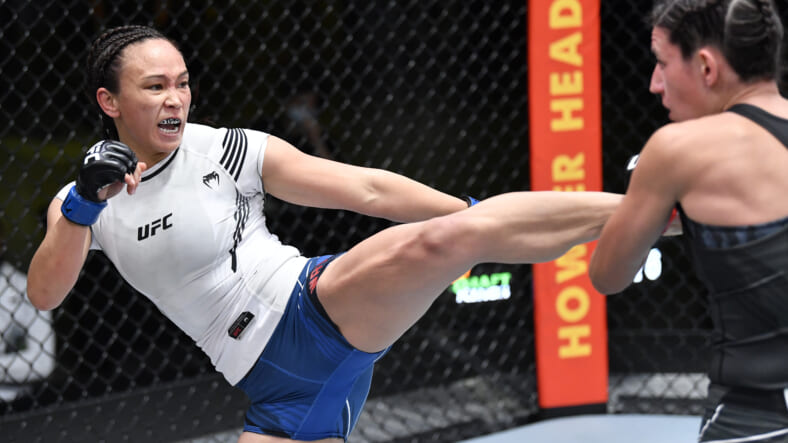 Tomorrow in the co-main event of UFC Long Island, we are going to see an entertaining scrap in the strawweight division. Top contenders will battle it out as “The Karate Hottie” Michelle Waterson (18-9) takes on Brazil’s Amanda Lemos (11-2-1).

For Waterson, this will be her first trip back inside the octagon since May of last year. The 14 month layoff comes on the heels of a loss to Marina Rodriguez which dropped Waterson to 1-3 in her last four. Granted, the losses came against Rodriguez, Carla Esparza, and Joanna Jedrzejczyk.

She needs a big win tomorrow at UFC Long Island, but it’s not going to come easy. Standing in her way will be Amanda Lemos. We just saw Lemos back in April compete in her first main event against former UFC champion Jessica Andrade.

Lemos was looking good until she got into a grappling exchange and was choked by Andrade which forced her to tap. The loss snapped a five-fight winning streak for Lemos. She will try to get back on the winning track with a win over the popular Waterson tomorrow.

While her nickname is The Karate Hottie and she does have a karate background, we rarely see Michelle Waterson lean heavily on her striking. Instead, in her UFC career, we’ve seen her use her striking more as a way to setup takedowns and grappling exchanges.

Don’t get me wrong, we’ve definitely seen her kicks in action, but in her best wins, she’s relied on her wrestling. I’m imagining that will play heavy into the game plan at UFC Long Island. Lemos is very long and has great technical striking.

We’ve seen Waterson struggle at times with rangy and technical strikers in her UFC career. This fight could play out a lot like the Joanna and Rodriguez fights if Waterson isn’t able to implement her game plan.

Honestly, that’s how I see the fight going. Waterson will have some success, but I think this is Lemos’ fight to lose. I’m expecting her to control the range and land the bigger shots on her way to a decision victory.