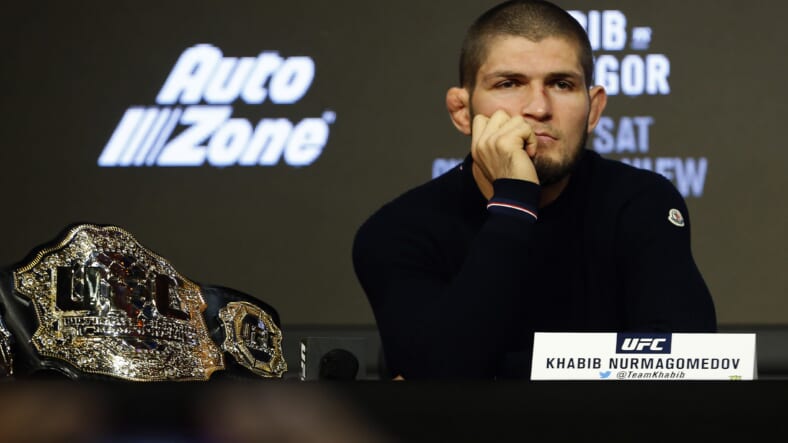 Dana White will finally get his chance to meet with the UFC‘s lightweight champion this week. White will meet with Khabib Nurmagomedov (29-0) this week on Fight Island where the two will talk about Khabib’s future.

We last saw Khabib back at UFC 254 when he demolished Justin Gaethje to retain his lightweight title. Following the fight, Khabib collapsed in the octagon and sobbed reflecting on the challenging year he’s had.

Nurmagomedov lost his father earlier in the year who was his lead trainer and his best friend. Khabib announced after the fight was over that he wouldn’t be fighting anymore without his father.

The UFC lightweight champion said he promised his mother that he would retire. With that, Khabib Nurmagomedov laid down his gloves and said he was walking away at a perfect 29-0.

However, Dana White isn’t ready to see Khabib walk away. White knows that Khabib’s father always wanted him to go out at 30-0. With that, the UFC President wants Khabib to fight one more time before hanging it up.

White had an interview yesterday with ESPN’s Brett Okamoto where he talked about it. He said, “I have no idea (how the meeting will go), but I think he should fight again. I’m going to press him as hard as I can for one more.”

Will the UFC lightweight champion return?

In my opinion, it’s going to be very tough for White to convince Khabib to return. Nurmagomedov has been very vocal that he doesn’t have any desire to fight Conor McGregor (22-4) or Dustin Poirier (26-6, 1 NC) for the second time.

Those two men headline UFC 257 and the winner is being looked at as the number one contender. White said in the interview that the biggest possible fight they could do is the Khabib – McGregor rematch should Conor win.

However, getting the lightweight champion to back out of retirement and accept that fight won’t be easy. I’ll say this, if anyone can convince someone of this, it would be Dana White.

In all my years following the sport, I’ve really only seen White come up short once when he’s this determined. That was of course the Fedor Emelianenko deal which of course was really dead in the water before it started.

This week will tell us a lot and I’m in the same camp White is in. I would love for the UFC to be able to put on the rematch between McGregor and Khabib should Conor win. I’m very curious to see the reports out of Fight Island this week.